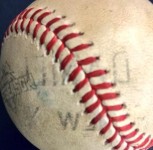 Coming into theses playoffs, the focus has been on David Wright and the Mets young pitching. However, there hasn’t been much attention to a homegrown Met who has waited his whole career for this moment. Daniel Murphy.

He was first called up in 2008 because he could take. The Mets called him up to help save them from a second collapse. Murphy held his end of the bargain even if the rest of the team didn’t. He spent the next eight years on losing teams trying to prove he was a major league second baseman.

He worked hard, and he eventually became an All Star second baseman. This year he’s the starting second baseman for a playoff team. He’s finally here after coming so close eight years ago. He quickly made an impression by hitting a homerun giving the Mets the lead in an extremely tight game:

Daniel Murphy made sure everyone knew who hit this home run: http://t.co/TCjcMpoPoX pic.twitter.com/0G3AfCsAht

In the ninth, he made a tremendous play to help the Mets preserve the 3-1 win:

Overall, the biggest impression he might’ve made was on the homerun ball:

Daniel Murphy hit the ball so hard his name was imprinted on it. (via @Mets) pic.twitter.com/dtiOTKJOba

That’s right. He hit the ball so hard, he left his name on it. After toiling for eight years with mediocre to bad teams, he literally made an impression. He’s been doing it with the Mets. Hes now doing it in the playoffs.

I can’t wait to see how he makes his next impression during this playoff run.

One of the reasons I had confidence in Terry Collins in the playoffs was his willingness to use Jeurys Familia for more than three outs to close out a game. This season Familia did it more than anyone.

Familia is by far the best reliever on the Mets. In my opinion, he was the best relief pitcher in baseball. When the game is on the line, you want your best guy out there. Don Mattingly didn’t, and Terry Collins did. So yes, Mets fans, Collins out managed Mattingly and had a direct impact on why the Mets won.

You can quibble with Tyler Clippard starting the eighth. I don’t think it’s fair because Clippard has been good with the Mets. Regardless, Collins was prepared. Once Clippard got into trouble, he went to Familia with two outs in the eighth. Familia got out of the jam and pitched a perfect ninth for the save. Moves like this are why Joe Torre is in the Hall of Fame, and Mariano Rivera will be one day.

Does Familia need to equal these numbers to be successful in the postseason?  Of course not. He just needs to be himself. He’s a closer that can go multiple innings. He can come on in the middle of an inning to get out of a jam. He can generate groundballs. He strikes out more than a batter an inning. He’s built for the playoffs.

Rivera had an amazing career. He was even better in the playoffs. This season Familia showed he was capable of being a great closer. Last night, he didn’t shrink from the moment. Rather, he was, at a minimum, as good as he was in the regular season.

As the playoffs and his career go on, I can’t wait to see Mo.

Watching a Playoff Game Sure Has Changed

I remember that game running late. I remember my roommate being really irked when my Dad called during the game. My roommate had an early class. I went into the hallway to talk to my Dad in a hushed voice to celebrate. The situation would be he same in 2000, but this time nothing would feel quite as new.

In 2006, I was out of school and living on my own. I still didn’t have text messaging, but I had a blackberry. I remember having a network of Mets fans that would be on the same email chain. Basically, the emails would look like Twitter, but with good hearted ribbing. The only one I talked on the phone with was my Dad because he wasn’t up on all that technology.

Last night was a completely different experience. I had a son that tried his hardest to stay up and watch the game. He fell asleep right before the first pitch. He would wake up later in the game when I let out a huge cheer after the David Wright RBI single. At that moment, my parental instincts were in direct conflict with my Mets fandom. I eventually rationalized that he wouldn’t remember this game, and I got him back to sleep.

This is when technology is great. It allowed my Dad, brother, and I to talk about the Mets even thoughts we were in three different locations. It doesn’t beat sitting there and watching the game with him, but it is still good. I hope to get together with him to watch some games as the first pitch times get a little earlier.

Even if they don’t, I will still be able to talk to him throughout the game.

Cuddyer Needs to be LEFT Out

An unfortunate part of Mets history is Willie Mays falling down in the outfield during the 1973 World Series. It was a sign Mays was done in his last season.

Michael Cuddyer had a similar experience last night. He misplayed two potential flyball outs into doubles. He struck out on a pitch that almost bounced in the grass in front of home plate. It was an ugly game for him. Fortunately, his teammates bailed him out. He would come out in the seventh for defense. His nightmare game ended.

It also may have ended his chances to be a starting outfielder in this series. His only chance was to be the right handed bat in a LF platoon with Michael Conforto. After last night, I’m assuming Cuddyer stays on the bench against lefties, and Juan Lagares starts in center. Since Lucas Duda was in the lineup against Clayton Kershaw, he’s not sitting against lefties in the playoffs.

Cuddyer has excelled in that role. It’s where he’s needed right now. Cuddyer didn’t cost the Mets on Friday, but if he keeps getting on the field, he eventually will hurt them. However, Cuddyer is still a big asset as a PH and a mentor. He could still get some playing time in a double switch.

Cuddyer is still a big part of this team. I look forward to him getting a big pinch hit this postseason to prove it.

For the past few years, I’ve lived and died with the New York Rangers deep postseason runs in an attempt to win a Stanley Cup. Whether the Rangers won or lost, I was too wired to go right to bed, so I would go to MSG to consume as much post-game coverage as I could.

In those shows, you see the players get interviewed in the locker room. You get a sense of where the team is mentally. These past few years, I could see the Rangers had a steely resolve. They had the best goaltender in the sport, and they believed they could win no matter what happens.

Early this morning, after an exhilarating 3-1 win, I turned on the SNY post game show. Originally, David Wright and Daniel Murphy were on the dais. They talked about their big hits, but they were more interested in singing the praises of Jacob deGrom, who would shortly join them on the dais. Here’s what happened next:

That’s right. After the biggest game of deGrom’s career, his first inclination is to prank Murphy eliciting a “Yowsa!” from Murphy. I don’t know if it was the prank or the “Yowsa!” but deGrom and Wright were chuckling to themselves. While this was going on, Murphy let him know “that’s messed up Jake.”

I hope the Mets can laugh all the way to the World Series.

deGrominant Start to the NLDS

Mets fans have been waiting nine years for this game. They were treated to a special, record setting game:

.@ClaytonKersh22 & @JdeGrom19 each have 11 Ks, making this 1st #postseason game for both starters to reach feat. pic.twitter.com/6OvT1zQGQG

This was the type of game if you have no rooting interest, you enjoy every minute of it. When you’re a Mets fan, you live and die with every pitch. It’s tense. It’s trying. It’s worth it.  I actually checked with my Dad to see if his defribulator was working. I took it that since he replied it was.

Personally, I don’t think I was breathing until the seventh inning. deGrom and Kershaw, though dominant, were seemingly in trouble every inning. Michael Cuddyer, and his extra shoddy defense, made sure of that.

Up until the seventh inning, the only run was from a fourth inning Daniel Murphy home run. It was a special moment. Murphy was first around for the second collapse in 2008. He’s the second longest tenured position player. He fought to be an everyday player. With one swing of the bat, he showed everyone he deserved this chance.

Ironically, on a night the Mets sat Michael Conforto because of Kershaw, only the Mets lefties got hits off of Kershaw. However, the Mets batters did their job in the seventh. Lucas Duda walked. Ruben Tejada fought back from an 0-2 count to walk. After a deGrom sacrifice, Curtis Granderson battled to walk. The bases were loaded with two outs, and Mattingly panicked.

He lifted Kershaw and brought in Pedro Baez. He looked nervous. He got David Wright to a full count, and Wright delivered with a two RBI single. I screamed and woke up the house. It was worth it. My celebration was something like this:

I breathed a little easier when Juan Lagares came in for Cuddyer shifting Yoenis Cespedes to left. Of course, Tyler Clippard allowed a run in the eighth giving me angina again. Terry Collins didn’t let it get out of control. He brought in Jeurys Familia, who got ended the rally, and earned the four out save preserving the Mets 3-1 victory.

Overall, this night wasn’t about Murphy, or Wright, or the fans who waited nine years for this moment. This was about deGrom. He has answered every call in his career.  He was Rookie of the Year. He was an All Star. He earned this start, and he more than delivered. He was better than the Franchise.

The Mets are up 1-0 in the series. Later tonight, we’re expecting another pitcher’s duel, and the Mets are sending out the hottest pitcher in baseball. I like the Mets chances. Lets Go Mets!