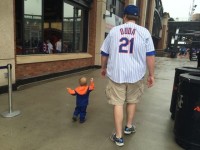 In my life, I’ve actually purchased very few Mets players jerseys. The first was Mike Piazza. After that it was David Wright and then Matt Harvey. I’ve received others as gifts (some requested), but those are at that I’ve purchased.

The one player jersey I always wanted was Daniel Murphy. I never purchased it. It seems that each and every year Murphy was a Met, he was rumored to be out the door. For various reasons a trade never materialized. I didn’t want to buy the jersey only for him to be traded the next day. Well, a funny thing happened. Murphy lasted seven years. He had a signature postseason game. He had the greatest postseason run for any Mets hitter ever. None of that should surprise us because Murphy was always incredibly clutch.

The time to purchase his jersey has passed because he’s gone. Sure, I could purchase one hoping I’ll see him again one day to get that autograph. I could wear it for the day he comes back to Citi Field. The thing is it wouldn’t make sense. Thinking about it, the Wright jersey, albeit outdated, is still good 11 years later. I could purchase another like a Yoenis Cespedes‘ jersey. However, he presents the same problems:

Cespedes is signed, but will he be around long enough to buy his jersey? KP has a flat in NYC for what? Hahn & Humpty next on @ESPNNY98_7FM

So right now, I have two Mets jerseys that’ll serve well for the 2016 season. The aforementioned Harvey jersey and the Lucas Duda jersey my son got me. If I’m going to purchase another, I’ll make sure it’s a player who will likely be around for more than one year.

Hopefully, that player will be with the Mets for at least seven years.