Shortstop is a Conundrum 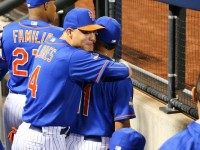 The recent Andrelton Simmons trade rumors suggests again the Mets know there is a hole at shortstop.

Last year, Wilmer Flores showed he wasn’t an everyday shortstop. On top of that with Daniel Murphy likely departing, he may be needed at second if Dilson Herrera isn’t ready. On top of that, Ruben Tejada once again exhibited limited range for the position, and that is before taking into account his broken leg. You’d like to say Matt Reynolds is an option, but he regressed at the plate last year in a hitter’s league and park. Furthermore, he, like Flores, is someone who may not profile as a major league shortstop.
The Mets have two well regarded shortstop prospects with Gavin Cecchini and Ahmed Rosario. Both played in AA for the first time last year. While Michael Conforto made the jump from AA to the majors, it would be unfair to presume these two could. Conforto did something rare. Accordingly, it’s safe to assume Cecchini and Rosario are at least two to three years away from playing with the big league club.

The free agent market is thin at shortstop with the best option being a high priced player in decline for the past two years. Furthermore, the Mets unloaded their best trade pieces on rentals to go all-in last year. This begs the question, what do you do?

Well, there’s only one thing to do. You let the free agent market shake out. You look to take on one of the remaining shortstops on either a minor league deal or a cheap major league deal. I’m sure a player like Jimmy Rollins is looking for one last chance to win a World Series. Alexei Ramirez may want a one year deal to re-establish his value.

No, I’m not excited about these players either. However, it’s the reality of the Mets situation.  Much like they wanted to catch lightning in a bottle with Flores last year, they’re looking to do it again next year with Flores or whoever else it may be.

It’s difficult knowing the Mets real shortstops are two plus years away, but the team is ready to win now.