The Five Stages of Yoenis Cespedes 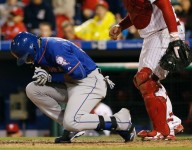 At some point or another, we have all heard of the Five Stages of Grief, which are:

Not to demean anyone’s grief, but this truly feels like what the Mets fans are currently going through with Yoenis Cespedes.

When the Mets first acquired Cespedes, there wasn’t any question whether the Mets could re-sign him. Cespedes had a quirky contract that forced the team he was on to negotiate a deal within five days. If the deal was not completed, he could not be re-signed by that team for basically another year or so. However, there were some events that changed that.

The first was Cespedes got hot. Not just hot; no, he was insanely hot. From August 12th – September 14th, he hit .323/.379/.805 with 17 homers and 37 RBI. He then waived the obstructive clause in his contract thereby allowing the Mets to sign him at any point in the offseason.

As the offseason began, the Mets fans entered the denial stage. Despite all evidence pointing to the contrary, Mets fans believed that Cespedes would return. The reports all said he would t return. Mets fans focused on the team having extra money from the postseason run, money freed up from Michael Cuddyer‘s retirement, and Cespedes’ own overtures that he wanted to come back to the Mets.

Then the Mets signed Alejandro De Aza to be the left-hand hitting platoon option for Juan Lagares in centerfield. At this point, the idea of Cespedes not returning to the Mets became more real, and the Mets fans responded angrily. They besieged every Mets tweet with a “Re-sign Cespedes” or something of that nature. They began to point out how the Mets have all that extra revenue from an extended postseason run, and they’re still not spending it.

With the Tigers signing Justin Upton, the Mets fans have entered the bargaining phase. With one less suitor for Cespedes, the Mets fans now believe Cespedes may take a shorter term deal from the Mets.  Sure, they want the Mets to give him a long term deal, but they’re willing to accept that the Mets can re-sign him for a one to three year deal. The Mets can make it work with lots of opt outs.

This leaves Mets fans with two more stages: Depression and Acceptance. Depression will surely come as another team swoops in and signs Cespedes. They’ll be depressed thinking about Lagares and De Aza manning center while Cespedes is off bringing his unique skill set somewhere else. Finally, probably around Opening Day, Mets fans will see their team in action and accept the roster for what it is.

So while this offseason is almost over, Mets fans are really only halfway through the Five Stages of Cespedes. If only it were as fun as celebrating the holiday of Cespedes.