Then, John Harper of the New York Daily News wrote an article not just about trading deGrom but also Noah Syndergaard.

Like Carlin of CMB, Harper dismissed the notion deGrom would be traded to the Yankees as the Mets did not want to give the Yankees the final piece of their championship puzzle. Still, that did not stop the New York Daily News from printing this back page: 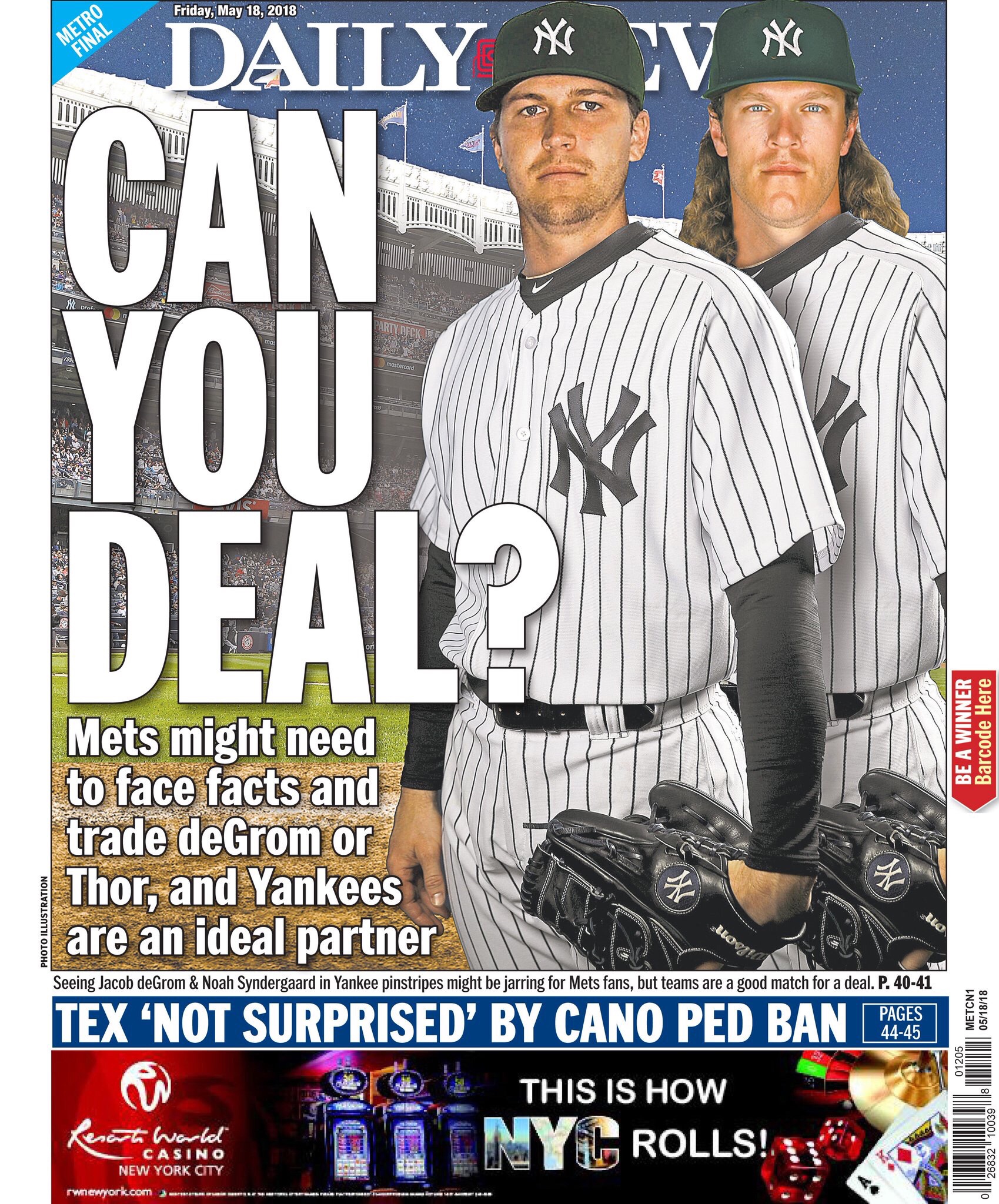 It should be noted Carlin was a former SNY employee who still has ties to many at both the network and the Mets organization.

For his part, Harper regularly appears on SNY, especially on Daily News Live.

Yes, for those who forgot, the Mets, SNY, and the New York Daily News are in bed together.

If the Mets were ever going to contemplate trading their big pitchers, especially one as popular as deGrom, you first want to gauge fan reaction. Ideally, if possible, you would want to begin to manipulate fans into agreeing this decision is best for the team.

The best way to do it? Well, that back page is a good start.

At the moment, Mets fans are in a panic deGrom will be pitching the Yankees to a World Series title much like David Cone once did. Only this is worse because it was the Blue Jays who traded Cone to the Yankees. This time the Mets are trading deGrom to the Yankees!

This causes many a Mets fan to exclaim, “Anywhere than the Yankees!”

That’s not the same as don’t trade deGrom.

Now, we know the Mets aren’t trading anyone just yet. It’s still way too soon, and even with a 3-10 May record, this team is still just 4.5 games out of the division and one game in the loss column from a Wild Card spot.

Still, when things are this bad, and everything is on the verge of spiraling out of control, you begin to at least lay the groundwork for being sellers at the deadline. If you want to blow it all up and do a full rebuild that means trading deGrom.

From a PR perspective that’s a nightmare, which is why you put it in Mets fans heads he could be a Yankee. When he’s not a Yankee, you’re relieved.

Then, when you turn on the radio or SNY, you will get to hear what a great return the Mets received in exchange for deGrom and how these players will accelerate this rebuild.

You’ll hear that because the Mets have ties all over the local media to help them manipulate the Mets fan into buying the team’s narrative.

And it all started with then laying a foundation for the Mets trading deGrom . . .