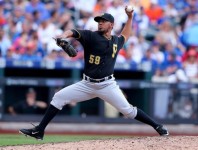 I can make a case that Antonio Bastardo was a bad or unnecessary free agent signing. He walks to many guys. Following his ERA+, he’s an every other year player, and next year is his bad year. The Mets were well represented from the left-hand side with Jerry Blevins, Dario Alvarez, and Josh Edgin. Last year, Bastardo had less innings pitched than appearances.

No, I’m again going to question this front offices’ obsession with steroids players. Bastardo is the third steroids player the Mets have signed this offseason. Bartolo Colon and Asdrubal Cabrera are the others. On top of that, the Mets offered Jenrry Mejia arbitration. This is the same Mejia who was suspended twice last year. The same Mejia the Mets were reportedly angry and disappointed with for the suspensions.

How can the Mets say one cross word about Mejia when they keep bringing other steroid users into the organization?  It’s hypocritical. It’s apparent the Mets don’t care about steroids. They care about players getting caught.

If you think I’m going too far with this, or you don’t care, please consider this tweet:

Hey Antonio Bastardo, remember when we competed for a job in 2011. Thx alot. #ahole

That’s right.  A roided up Bastardo beat a presumably clean pitcher for a job.  Meyer never pitched in the big leagues again, and Bastardo has a two year $12 million contract. Of course it came from the Mets.

They love players who use steroids upo until the time they get caught. Then they’ll tell you how much they hate it. Hypocrites.