McDonalds Halloween Pails Are Back

One of the best things about being a parent is you get the opportunity to remedy the perceived wrongs from your childhood.  No matter how small or childish they may seem, we all have ones that linger.  One of my lingering issues was my parents not going out and getting the Halloween Pail Happy Meals when my brother and I were children.

You see the Mets winning the World Series wasn’t the only major event of October 1986.  I’ve never confirmed this, but I’m pretty sure Mookie Wilson got one of these for his stepson and nephew Preston Wilson.  Much like the Mets hopes of winning the World Series the following year, my hopes of getting a McDonald’s Halloween Pail were dashed in 1987.  My chances of obtaining one in 1989 were as much as nonstarter as the Mets chances were that year.  In 1990, Keith Hernandez and Gary Carter were closer to New York than I was to getting my Halloween Pail.  In 1992, there were no hopes for me or the Mets.  From there, the Halloween Pails all but disappeared.

That was up until last year when the Halloween Pails re-emerged.  Despite Matt Harvey, Jacob deGrom, and Noah Syndergaard not being alive in 1986, these trio of arms led the Mets to the World Series in the same year the Halloween Pails returned.  Never underestimate the power of the pails.  Like the good Mets fan and father (or petulant child) that I am, I made sure to get all four of them for my son who really had no clue who the Minions were or why he needed four of these pails.  That changes this year. 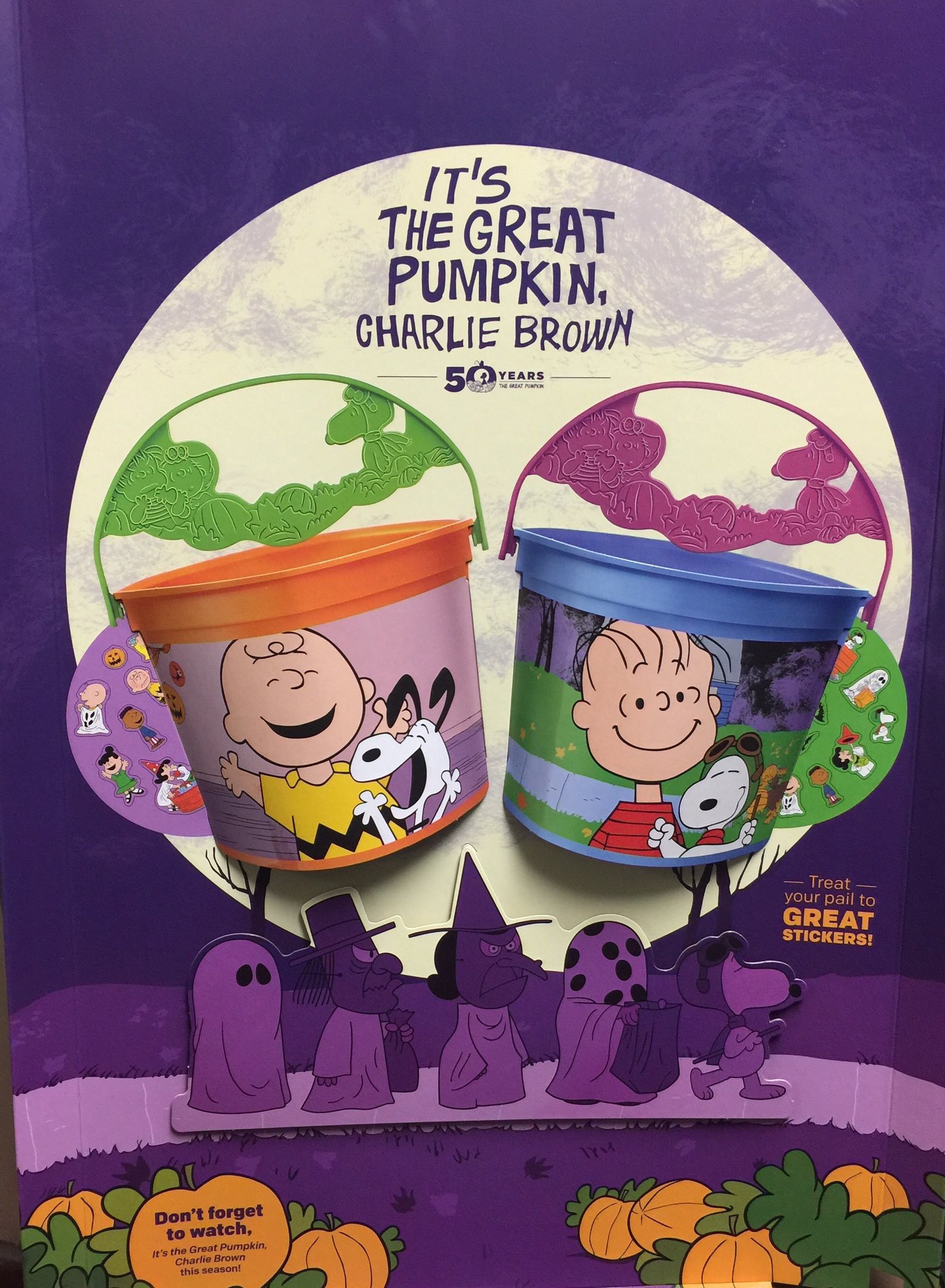 My son loves Peanuts.  He has loved them since we took him to see The Peanuts Movie, his first ever movie, for his birthday last year, and since he saw A Charlie Brown Christmas last year.  Like any child, he loves Charlie Brown, Snoopy, and the whole Peanuts gang: With that, we have now found the intersection where my son’s love of Peanuts and my need to get these Halloween Pails have met in the parenting Venn diagram.  With that, I have checked one thing off my parenting bucket list, and I will now seek out curing other perceived wrongs like never getting the chance to attend a Mets World Series victory parade.  I guess that one will just have to wait until next year.

To ensure that will happen, I think McDonalds will need to roll out an Avengers Halloween Pail featuring Thor, Captain America (David Wright), Iron Man (Steven Matz), and The Incredible Hulk (Lucas Duda).

By the way, the Great Pumpkin is on tonight:

It's the Great Pumpkin, Charlie Brown airs tonight on @ABCNetwork at 8/7c! pic.twitter.com/e9UOr3mua6

From Todd Hundley to Mike Piazza

The things we are willing to tell ourselves as fans can sometimes be quite outlandish.  Back in 1997, if you polled Mets fans, they would probably tell you they would rather have Todd Hundley than Mike Piazza.  Why not?

The two were the same age.  Both were All Stars in 1996 and 1997.  In those two years, Hundley had hit 71 homers to Piazza’s 76.  Hundley had 198 RBI to Piazza’s 229.  Hundley’s 53 doubles surpassed Piazza’s 48.  In fact, Hundley’s 127 extra base hits were actually two more than Piazza’s 125.  On top of that, Hundley was a switch hitter and a much better defensive catcher.  He was the homegrown Met that was afan favorite with his very own Todd Squad cheering section at Shea Stadium.  Hundley’s career was taking off, and he was seen by Mets fans as a newer version of Gay Carter.  When he returned from his elbow surgery in 1998, he was expected to once again be the slugging defensive minded catcher who was going to lead the Mets to the postseaon for this first time in a decade.  If you took a poll of Mets fans, they may begrudging admit Piazza was the better player, but overall, they would also state their belief that they would rather have Hundley as he was their guy.  It was all a moot point anyway because there was no way the Dodgers would ever get rid of Piazza.

Until they did.  There wasn’t a baseball fan alive in 1998 that was utterly shocked when Piazza was traded to the Florida Marlins along with future Met Todd Zeile for a package that included future Met Gary Sheffield and former/future Met Bobby Bonilla.  Once Piazza was a Marlin, the world over knew the team that sold everything except the copper wiring after winning the 1997 World Series was going to trade the impending free agent Piazza.  All of a sudden, the very same Mets fans who loved Hundley, desperately wanted Piazza.  Myself included.

It was certainly possible.  In that offseason, the Mets had acquired Al Leiter and Dennis Cook.  There was a reporte there.  Even with those trades, the Mets still had a good farm system headlined by Mookie Wilson‘s stepson, Preston Wilson, who could justifiable headline a Piazza trade.  Without Hundley, the team was languishing around .500, and they needed a shot in the arm if they were ever going to earn a postseason berth.  You could tell yourself that when Hundley got back he could either play left field in place of the struggling Bernard Gilkey or in right in place of another fan favorite, Butch Huskey.  At least, that is what you told yourself.

Amazing, it actually happened.  On May 22, 1998, the 24-20 Mets actually pulled off a trade to acquire Piazza.  Perhaps just as a amazing, when the Mets activated Hundley from the disabled list on July 22nd, they put him in left field.  Very rarely in life does things happen exactly as you imagined it would.  This did.

Except it didn’t.  While Piazza was originally greeted with a hero’s welcome, he would then become roundly booed by the very same fan base who was desperate to acquire him.  Hundley would be a disaster in left field.  As uncomfortable as he was in the field, he was equally uncomfortable at the plate hitting .162/.248/.252 with only one home run.  He eventually forced Bobby Valentine‘s hand, and he became the backup catcher to Piazza.  In retrospect, how could it have ever worked?  Piazza was a star in Los Angeles, which is nowhere near the hot bed New York was.  Hundley was a catcher out of the womb as he was taught the position by his father Randy Hundley.

But then on a September 16th game in the old Astrodome, it all worked according to plan.  In the top of the ninth, with the Mets trailing 3-1, Piazza, who had been 0-3 on the night, stepped in the box against Billy Wagner with two on and two out.  He would launch a go-ahead three run homer.  After Cook blew the save in the ninth, Hundley would be summoned to pinch hit in the top of the 11th.  He would hit a game winning home run.  It would be the first and only time Piazza and Hundley would homer in the same game.  In fact, it was Hundley’s last homer as a Met.  At that point, the Mets seemed to have control of the Wild Card, but they would eventually fall apart, thanks in LARGE part to Mel Rojas, and they would just miss out on the postseason.

Going into that offseason, the Mets had to make a choice.  Do you stick with your guy Hundley behind the plate, or do you bring back Piazza.  To everyone’s delight, the Mets made Piazza the highest paid player in the game giving him a seven year $91 million dollar contract.  When the Mets re-signed him, the Mets seemed assured of returning to the postseason.

And they did with the help of both Piazza and Hundley.  With Piazza back in the fold, the Mets had to move Hundley.  That spurned two shrewd moves by Steve Phillips that helped build a supporting cast around their superstar.  Hundley was traded for Roger Cedeno and Charles Johnson, the same Johnson who was traded by the Marlins to acquire Piazza.  Cedeno would spend 1999 being tutored by Rickey Henderson, and he would set the then Mets single season record for stolen bases while manning right field.  Phillips would then flip Johnson for Armando Benitez, who would become a dominant closer out of the bullpen.

Piazza was dominant that year.  He hit .301/.361/.575 with 40 homers, a Mets right-handed batter single season record, and 124 RBI, which is the Mets single season record.  He led the Mets throught the play-in game and into the NLCS.  His seventh inning opposite field home run off John Smoltz in Game Six of the NLCS tied the game at 7-7.  In a game they once trailed 5-0 and 7-3 and a series they had trailed three games to none, it seemed like the Mets were on the verge of pulling off the impossible.  With a Kenny Rogers walk, they didn’t.  The Mets came so close to making the World Series, but they fell short.  Even with as much as Piazza gave them, they would need more in order to make it to their first World Series since 1986 and to play in consecutive postseasons in team history.

Amazingly, Piazza had another gear.  He would hit .324/.398/.614 with 38 homers and 113 RBI.  It remains the highest slugging percentage in team history.  The 78 homers and 237 RBI over two years stands as the team records over a two year stretch.  He would tie the Mets single season record with three grand slams.  In 2000, the Mets would go to the World Series, and they would fall agonizingly close as his shot to center field fell just short of tying the game.

It was a start to an amazing Mets career and part of a Hall of Fame career.  Before Piazza left the Mets after the 2005 season, he would hold many records.  He would have the most home runs by any right-handed Mets batter and second most all time to Darryl Strawberry.  He would also be second to Strawberry in team RBI.  He would be passed by David Wright in those catergories.  However, Wright wouldn’t pass Piazza in some other catergories.  Piazza has the third highest team batting average, and he has the highest slugging percentage in Mets history.  He would also hit the most home runs all time by a catcher surpassing Johnny Bench.  It was one of many memorable home runs in Piazza’s time with the Mets, which included the June 30, 2000 home run capping a 10 run eighth inning rally that saw the Mets overcome an 8-1 deficit against the Braves, and the most important home run he would ever hit:

Years ago, Mets fans would’ve picked Hundley over Piazza.  Almost twenty years later, Piazza chose us when he chose to enter the Hall of Fame as a New York Met joining Tom Seaver as the only Mets in the Hall of Fame.  It was an incredible ride that has seen Piazza become perhaps the most beloved Met to ever wear the uniform.  He deserves that love and much more.  He deserves every congratulation and accolade the Mets, Mets fans, and all of baseball can throw his way.