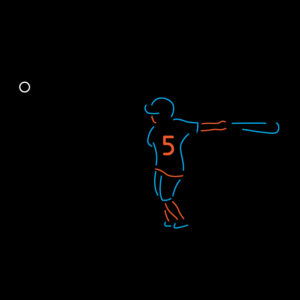 If you’re an older Mets fan, you are familiar with the neons which used to adorn the facade of Shea Stadium.  With the move to Citi Field, the neons are now just a part of the carpeting of the Mets clubhouse.  Quite possibly, those neons were incorporated because they are so uniquely Mets, and they are reminiscent of those 80s Mets teams.

Athlete Logos has taken it a step further with his Neon Project.  The Neon Project takees different iconic moments from Mets games and creates them into one of the classic Shea Stadium neons.  For example, here is one of the classic David Wright fist pump after he scored a key run in the game against the Nationals.

Since its #DavidWright Weekend I figured it would only be fitting to do a neon of one of his iconic moments as Met. The fist pump against the Nationals was a great example of who David Wright was as a player. #LGM #NYMNeonProject #ThankYouDavid pic.twitter.com/evV03CLipb

Being a fan of the Neon Project, I reached out to Athlete Logos to see if he could do it for more than just Mets moments.  He was not only able, but he was more than willing.  In order for him to do the work, all I needed to do was to provide the picture.

For me, the choice of the picture was easy.  Last year, my son began playing t-ball.  In his first ever at-bat, he would hit a home run.  It was a proud moment for me as a father, and I was thrilled I had both photos and videos of it.  Being the huge Mets fan I am, I wanted to take it a step further.

With the neon, I have been able to do a t-shirt for my son, which he loves.  I also got an ornament for my Christmas tree, and some gifts for relatives this Christmas in the form of ornaments, magnets, or those Shutterfly photo plaques.  No matter what the medium, they have printed great, and I have no issues whatsoever.

Overall, it has proven to be a fun one to encapsulate one of my fondest baseball memories, and it is something I highly recommend other people do.  If you are interested, and you should be, you can begin the process to emailing Athlete Logos at athletelogos@gmail.com.

Editor’s Note: This is not a paid advertisement or endorsement.  Rather, this is just my being satisfied with the work product and recommending it to other people.