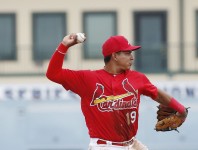 When Ruben Tejada was tendered a contract, I agreed with the move. When the Mets released him, I understood the move. He was taking up a spot on the 40 man roster, and there were important roster decisions to make. Now that Spring Training is over, and the roster is set, I don’t understand the Mets thought process.

The Mets could’ve used it to acquire a backup catcher. Rene Rivera, a strong defensive catcher, is a free agent. The Mets decided to bring back Johnny Monell on a minor league deal despite a tough 2015 season. Apparently, the Mets weren’t happy with their choices or with the choices available because they put Kevin Plawecki on the Opening Day roster. Rather than them using the last spot on the 40 man roster, the Mets decided to allow Plawecki reach Super Two status. They are gambling with hindering Plawecki’s development by not getting him regular playing time.

They are also relying on Wilmer Flores being the primary backup to all four infield positions. They are hoping Eric Campbell can be a good bench player like the front office has always imagined he could be. They are hoping that if he falters, or there is an injury, Matt Reynolds could fill-in. They are taking this risk despite Reynolds not having an obvious position to play in AAA with the presence of Dilson Herrera and Gavin Cecchini.

The Mets knew Tejada could adequately play second, third, and short. His presence could’ve allowed the Mets to let Flores get more time at first and third. For reasons now unknown, the Mets decided not to go this way. The Mets decided not to go with a bona fide major league caliber player to be a utility player even though Tejada arguably had the best year of his career when he started the year as a utility player in 2015.

Instead, the Mets let Tejada go to another National League team. If not for his recent injury, he would be helping the Cardinals try to win a World Series. There was a spot for him to do that with the Mets. Instead, the Mets have decided to let that last 40 man roster spot go to waste.

Upon reflection, the only reason it makes sense for the Mets to release Tejada and for them not to add another catcher is money. By cutting Tejada when they did, the Mets saved about $2.5 million.

The Mets are making cost cutting moves that harms the team’s depth despite tickets sales being much better than the Mets thought it would be. The Mets are paring down payroll despite the Mets slightly raising ticket prices.

Yes, the Mets went out and spent the money on Yoenis Cespedes. Yes, the payroll is more commensurate with what a contending team’s payroll should be. However, releasing Tejada is an unnecessary mickle and dime maneuver. He was depth. After last year’s rash of injuries, you would think the Mets wouldn’t take that lightly. He wasn’t taking anyone’s spot on the roster. In fact, they’re not even using all the spots available to them on the roster.

Hopefully, the Mets season doesn’t come down to a $2.5 million decision the team made in March.