All Praise is Due to Cespedes 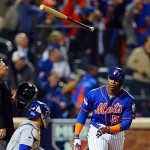 I’m still in shock, but Yoenis Cespedes is returning to the Mets. Better yet, the Mets opened the pocketbook in order to re-sign him. It’s incredible. La Potencia is back in Citi Field.

This is even better because this shouldn’t have happened. It’s been a very bizarre offseason with many of the top free agents remaining unsigned until after the New Year. In any other year, Cespedes would’ve been signed long ago. Teams normally would’ve jumped all over him because he didn’t have a Qualifying Offer attached. The Mets got very lucky.

The Mets were lucky because Cespedes was still on the market. They’re lucky Cespedes turned down bigger offers. They’re lucky he was willing to effectively take a one year deal. They’re just plain lucky.

I’ve seen people saying the Mets played this perfectly. I’ve seen people saying the Mets are owed an apology. This is all nonsense. The Mets signed Alejandro De Aza to platoon in center. The Mets moved on from Cespedes. De Aza was not part of a long con to get Cespedes. No, for some reason, Cespedes was still on the market when he shouldn’t have been. As a result, the Mets got lucky, very lucky. We should all celebrate this day. However, no one should be patting the Mets on the back. Instead, we should all be taking the other 29 teams for not making Cespedes an offer he couldn’t refuse.