Now that the Mets have clinched the NL East, the time is fast approaching to set the NLDS roster. Keep in mind, this is for the NLDS only. The Mets can the roster if they advance to the NLCS.

I’ve made some changes to my prior analysis. The reason is due to injuries to players like Juan Uribe. Another reason was the possibility that Jon Niese and Bartolo Colon may move to the bullpen.

Note, this is not what I would do, but rather, what I think the Mets will do. I am taking into consideration the Dodgers lefty heavy starting rotation and lineup. Without further ado, here’s my best guess:

I’m not 100% confident in this. I could see Uribe getting healthy enough to play knocking EY, Lagares, or Johnson out of the lineup. With all the lefties, I could see Eric Campbell or Dilson Herrera (3-4 with a walk, a homer, two runs, and a two RBIs on Sunday) making the team as well.

I also think there is real competition and consideration for the last three bullpen spots. Erik Goeddel has been great all year (when healthy). Carlos Torres is a Terry Collins’ favorite, who may make the team if healthy. Logan Verrett has made his car all year bouncing between starting and reliever. If Colon takes Matz’s spot in the rotation, there will be more bullpen spots because the Mets won’t put Matz in the bullpen.

No matter who is on the roster I’m excited for the playoffs again. Lets Go Mets!

Fun Guess at the Clinching Lineup 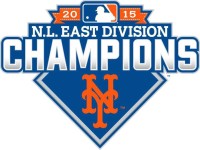 After clinching the NL East, the Mets celebrated and partied. They deserved it. However, there are nine guys that are going to have to play today, including starter Jacob deGrom.

I remember when the Mets clinched in 2096, the next day’s lineup was a mess. It’s going to be worse with a day game. I’m assuming some players will be arriving at the ballpark straight from the club. With that in mind, here’s my guess on who’s in the starting lineup today:

The lineup may be different, and I could see some changes. This looks like a lineup from the aggravating first half. The difference is this time this lineup stays in Cincinnati as opposed to traveling with them.

It should be fun. Lets Go Mets!

Like his past few starts, this game was all about Bartolo Colon clobbering the NL East. He’s now 13-1 against the NL East with a 2.52. He had a 31 inning scoreless streak that surpassed Warren Spahn‘s record for most consecutive shut out innings for a 42 year old. It was also fell 1.2 innings short of R. A. Dickey‘s club record.

Colon even asserted his dominance at the plate. After Kelly Johnson and Juan Uribe scored on a Kevin Plawecki 4th inning RBI double, Colon would single him home. Colin’s dominance and scoreless streak would end in the seventh when he allowed two runs. With two outs, he was lifted for Dario Alvarez, who did his job as a LOOGY, and got the lefty Nick Markakis out.

Hansel Robles was out attending to family matters. Tyler Clippard and Jeurys Familia were given the day off due to their usage in the Washington series. As such, Alvarez came back out for the eighth, and he pitched a 1-2-3 inning, which included getting Freddie Freeman out. It was a great job by him.

It looked like Addison Reed was going to get the save opportunity until Uribe hit a two run double in the ninth. Reed still came on and secuted the 7-2 win.

Colon’s battery mate, Plawecki, also had a good game. He went 1-3 with a double, a walk, and three RBIs, including an insurance run in the eighth. Overall, playing backups like Uribe, Johnson, and Plawecki allowed the Mets to rest Travis d’Arnaud, Daniel Murphy and his quad, and David Wright and his back.

That’s the benefit of building a big lead. You get to rest some guys who need rest. When you’re really good, you win those games, even when Yoenis Cespedes finally has an 0-fer. You win these games even with a two and a half hour rain delay and a flooded dugout:

Before moving along to the next game, our best wishes to Dan Warthen, who was not at the game because he had to go to the hospital with heart problems. I hope he gets better, and he comes back to enjoy this ride.

The Mets have announced what I presume is their first group of September call-ups. These players include Eric Campbell, Kevin Plawecki, Kirk Nieuwenhuis, and Eric Young, Jr.  It’s fitting these four are the ones being called up first because they have a legitimate shot at being on the postseason roster, especially Plawecki.

When I looked at this list, I was surprised that Dario Alvarez‘s name wasn’t on the list. With Eric O’Flaherty struggling and the Mets refusal to put Steven Matz in the bullpen, there are no lefty options. As the August 31st waiver trade deadline has passed, another one cannot be acquired. The Mets need to figure this out.

The Las Vegas 51s season ends on the 7th. They’re in last place, so there won’t be any playoffs for them. The Mets apparently don’t care about the 51s season, and nor should they. That’s why they gutted their roster. Why they left Alvarez behind is beyond me. He’s been terrific in AAA. He is 2-1 with a 2.61 ERA and a 0.871 WHIP.

Alvarez belongs in the majors, especially with the LOOGY problem unresolved. I don’t know that Alvarez is ready to be a LOOGY. I don’t know if O’Flaherty can fix his issues in September to become the LOOGY the Mets need in the playoffs. What I do know is the Mets need to figure something out soon. They could be facing Adrian Gonzalez, Jason Heyward, Matt Carpenter, Pedro Alvarez, and/or Anthony Rizzo. It would be nice to have a lefty to get those guys out.

It’s funny with all the Mets moves, this is the one area they haven’t been able to properly address. I’d hate to see them LEFT out of October glory for that reason.

UPDATE: it was pointed out to me by Jack Ramsey that Alvarez is not available to be called up until tomorrow. This post will be more pertinent tomorrow.

Are the Mets Reckering Their Prospects?

I don’t understand what the Mets are doing with their prospects right now. First, they are actively stunting the development of Michael Conforto by keeping him in the majors and not playing him everyday. Keep in mind, this is a player, they didn’t want to call-up in the first place.

Additionally, there is the constant noise over the six man rotation, but their young stud muffins are set to far exceed their innings limits.  Plus, these prized arms’ aches and pains are largely ignored until it becomes more serious. They even have Dan Warthen playing doctor. It’s inexcusable.

Their treatment of Kevin Plawecki is almost as ponderous. I understand he might’ve been the best option at backup catcher, but it’s not like he’s been good. It’s just that Anthony Recker and Johnny Monell have been that bad. That was, in part, the rationale behind keeping Plawecki up when Travis d’Arnaud came off the DL on July 30th. Let’s see how that worked out for Plawecki:

In essence, the decision was just short of being a disaster. Plawecki is going to be a Super Two player. Overall, he’s hit .228/.283/.296. Those are ugly numbers, especially when he’s a .292/.368/.435 hitter in the minors. Obviously, he should’ve been in the minors trying to get better. For those that argue that there’s value sitting on a major league bench, it sure hasn’t helped him thus far.

Plawecki probably would’ve benefitted from time in AAA making him a better player. d’Arnaud did the same last year, and he’s the better for it. Plawecki didn’t, and he’s worse off. The Mets catching situation is also worse off.

Overall, the Mets prospects are worse off the past two years in how they’ve been handled. I only hope Plawecki and Conforto can overcome it because they have real promise . . . promise that isn’t being g cultivated by the Mets. 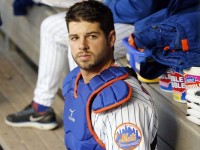 Yesterday, the Mets activated Travis d’Arnaud from the DL, and they surprisingly optioned Anthony Recker to the minors (I guess Bartolo Colon has an excuse again for his poor performance). I was surprised about this because it means Kevin Plawecki is staying on the Mets roster.

I guess I shouldn’t be that surprised because this is what happened the last time d’Arnaud was activated off of the DL. Look I understand the Mets’ reasoning in wanting to ease d’Arnaud back.  He’s an important part of the lineup.  However, if he needs to be eased back, why are they rushing him to the majors?  We know the answer is his bat, but if his elbow is not healthy, he’s not going to hit.  If this isn’t a case of rushing his bat back to the majors, then why did the Mets pick Plawecki over Recker or Monell?

The reason is simple. None of the Mets catchers are hitting. Plawecki is hitting .212/.257/.212 over the past two weeks. Anthony Recker is hitting .123/.254/.228. Al Leiter hit better than that as a 36 year old pitcher.  I know I’m cherry picking there, but I should not be able to pick out any of Leiter’s offensive seasons and compare them to a major league hitter. The last option is Johnny Monell, who is hitting .178/.245/.222. So you could argue, the Mets are going with the option that gives them a chance to win now. However, we should really be asking ourselves if this is the best option for the team.

Kevin Plawecki is a 24 year old catching prospect, who should be playing everyday. While d’Arnaud has been on the DL, Plawecki has been playing everyday. However, now that d’Arnaud is back, I do not see how sitting on the bench is going to help him. Plawecki has been up in the majors for 59 games worth of action. This is more than a cup of coffee. Normally, I would agree that sitting on a major league bench is good exposure for a rookie. However, he’s already done that. Whatever benefit that may have for his has or at least should have sunk in already.

Furthermore, last year when d’Arnaud wasn’t hitting, he was sent down to the minors. Plawecki is in the same situation d’Arnaud was in last year.  When d’Arnaud went down to AAA, he found his stroke. This season he’s hitting .296/.338/.535, albeit in very limited action.  With Plawecki currently struggling at the plate, shouldn’t the Mets consider sending Plawecki down to get him right? Seriously, at this point what’s the difference between Plawecki’s bat and Monell’s bat? If you want to sit d’Arnaud a little, let Colon have Recker as his personal catcher for now. You can always recall Plawecki in September when the rosters expand. God willing, you can have him on the postseason roster over Recker or Monell.

Overall, the Mets’ three priorities right now are: 1) make the postseaon; 2) build a team that can win in October; and 3) don’t do anything that can harm the future of the team. With respect to making the postseason, I don’t see a Plawecki being a difference maker over Recker or Monell in the limited action he’s going to see with d’Arnaud up. With respect to winning in October, I’d rather see Plawecki in the minors getting his swing right and being an option off the bench in September and October. Lastly, having him in the majors right now prevents him from really working to get better.

While I appreciate the Mets are trying to do everything they can to win, I think they are being extremely short sighted with Plawecki right now. He needs to be sent down to the minors to improve for the stretch drive and for seasons to come.