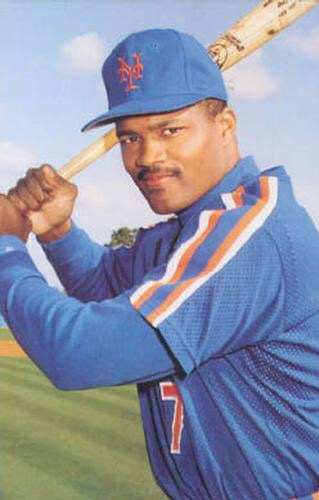 Dozier was a football player. He was a first round draft NFL pick by the Vikings and an 18th round draft pick by the Tigers. In the NFL, he’d get stuck behind Barry Sanders and Hershel Walker. He theoretically signed (as a minor league free agent) with the Mets for that reason. Basically, he was John Elway, but he stuck with baseball.

While in the Mets’ organization, he began to rise. He was ranked as the #44 Best prospect in all of baseball. He stayed with the Mets due to his unhappiness with the Vikings. The trouble is he never really panned out. He finally made the Mets in 1992 on the “Worst Team Money Can Buy.”  He hit .191/.264/.498 in only 25 games.

This is a cold reminder that typically the Mets are reactive instead of progressive. It’s a time when moves didn’t pan out. This move seemed more of the same like when Michael Cuddyer struggled right out of the gate.  It looked like another lost year at times with the struggling offense. As we know, it didn’t happen that way.

This year the moves and call-ups have panned out. Michael Conforto has been great.  We know about Yoenis Cespedes and his incredible hot streak after coming over to the Mets. This isn’t 1992 anymore. The Mets can win this year. This is why I like remembering players like Dozier. I want to see the progress of the team, and I like people are seeing how things are different now.