The first round in the Citi Bracket and the first round of the tournament are complete. There was no surprise with David Wright and Jacob deGrom advancing, but there were still some significant upsets at least as far as seeding is concerned. 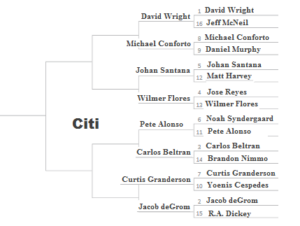 The biggest upset of the tournament so far was Wilmer Flores over Jose Reyes. That made Flores the lowest seed to advance. That is likely due to a combination of Flores love of the Mets as well as Reyes’ domestic violence. The other upset was Pete Alonso over Noah Syndergaard, but that was likely driven by Alonso’s all-time great rookie season coupled with his off the field actions.

The second round of the Citi Bracket will feature 2015 postseason heroes deGrom and Curtis Granderson. We will also see Alonso and Carlos Beltran face off. They are 1-2 in the Mets single season home run totals.

Starting tomorrow, there will be the second round of the tournament which brings us back to the Miracle Bracket with Tom Seaver facing off against Rusty Staub.