The first round of the Miracle Bracket is complete, and for the most part it went chalk. The first round winners were Tom Seaver, Rusty Staub, Ed Kranepool, Bud Harrelson, Jerry Grote, Cleon Jones, Tommie Agee, and Jerry Koosman. 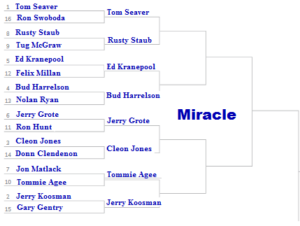 If you want to call Agee over a Jon Matlack you could, but that could have also been the case of seeding issues with this part of the tournament.

The next round has some interesting match-ups. In particular, the Kranepool/Harrelson and the Grote/Jones ones should be close. With the other two, it is expected for Seaver and Koosman to continue through to their Elite Eight clash between Mets pitchers who have had their uniform retired.

Before we get to that point, our attention will shift to the Amazin bracket with Keith Hernandez facing off against Tim Teufel to kick things off.