I’m Done with the Mets 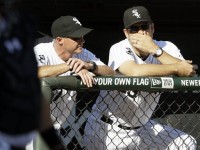 It’s a process that began with Game 5 of the World Series.

In that game, I saw Terry Collins turn to noted steroid cheat, Bartolo Colon, when the Mets were down in extra innings. The Mets went to him even after he blew Game 1 of the World Series. Why turn to a younger, fresher, and overall better arm like Hansel Robles?  No we go to Colon, who blew it again.

I processed the emotions of that loss, and I moved on. Then the Mets bring back Collins, the very same man who managed a horrendous World Series. They brought back Colon because, well, there was no good reason for that. Also, because Sandy Alderson is trying to replicate his late 80’s Oakland Athletics teams (i.e. steroid users), he added Antonio Bastardo to the bullpen mix. That was also after the Mets offered Jenrry Mejia a contract – if you’re not cheating, you’re not trying.

While the Mets made sure to keep their steroid cheats, they got rid of Daniel Murphy, who single-handedly carried the Mets this offseason. I guess if Murphy started a steroids cycle and hit 30 home runs last year, the Mets would’ve given him a legitimate contract.

Think about it. The Mets threw away Murphy, who led them to the World Series, and they kept Lucas Duda, who literally threw away the Mets chances of winning a World Series. If the Mets were really serious about winning, they would keep the players that helped them win, and they would’ve gotten rid of the streaky players that did nothing to help them win anything.

Furthermore, during the offseason, we had to see Matt Harvey flaunt his bedroom prowess on Bravo. We saw Noah Syndergaard take a victory lap at every New York stadium and arena after the Mets lost. He probably should’ve spent that time learning how not to lose a World Series or needlessly throw at batter’s heads.

Even better, the Mets released Ruben Tejada for no reason at all.  Tejada was an integral part of this Mets team. It was his injury that galvanized the Mets. Even with a cane, he was able to help the Mets win the pennant.  When the Mets released him, they not only got rid of their leader, they had no legitimate backup plan. Eric Campbell has no business being a baseball player, and Matt Reynolds is a complete bust. Seriously, just remember it was Omar Minaya’s players, not Sandy Alderson’s that won the pennant.

Well, if this team can’t take winning seriously, I can’t root for this team anymore. I still can’t root for another NL team, and I’ll never root for the Yankees. I’ll be honest. It’s hard to pick another team to root for. I’ve been a Mets fan all my life, and the vast majority of my family (including my Dad and brother) are Mets fans.

Right now, I’m leaning towards the White Sox. Their coaching staff is full of great former Mets like Robin Ventura, Joe McEwing, and Daryl Boston. They’re taking getting ready for this season seriously. They actually addressed their needs in the offseason, and they let Adam LaRoche know they will not let his son be a distraction.

I wish Mets fans the best of luck. It’s been 30 years since the last World Series. I’d like to tell you to hang in there; that’ll happen soon. However, I’ve seen two collapses, Carlos Beltran not swinging, and Mike Piazza fly out to deep center. I know it’ll never happen in my lifetime, especially not with this offseason.

Best of luck to you Mets fans. Go ChiSox!