What Are are the Wilpons Waiting For?  Buy Piazza’s 9/11 Jersey Already! 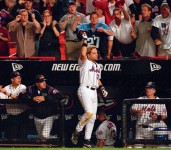 The Wilponzi Era was about as difficult a time as I’ve experienced as a Mets fan. You can argue that after bad trades and bad free agent signings. We can have a real debate about whether or not it was time to break it down and rebuild. However, what the Mets and their fans went through was so much more than that.

The news of the scandal broke in December 2008 as the Mets closed Shea Stadium and were on their way to open Citi Field. Despite the distraction, the Mets opened the season with a the second highest payroll in baseball at a little over $149 million. The team would suffer injury after injury before falling way out of contention. In 2010, despite payroll dropping about $20 million, they did try to improve the club by signing Jason Bay. As we know neither Bay nor the 2010 season worked out well.

In subsequent seasons, the Mets made no major free agent acquisitions. How could they?  The Wilpons lost at least $178 million. They were named defendants in the Madoff case and were sued for $1 billion. The Wilpons were forced to do whatever they could do to keep control of the Mets. They initially took out $65 million in loans from Major League Baseball and Bank of America. In total, the Mets borrowed over $980 million. Of that amount, $430 million was borrowed using the Mets as collateral.

The once $149 million payroll dropped down to $85 million (ranked 21st in the league). The Wilpons were facing a financial crisis, and they were doing everything they could go to go from being bankrupt. They began selling minority stakes in the team. They were trying to keep their main assets, which included the Mets.

As fans, we believed the most damaging effects of this was in the Win-Loss column. We believed it was the Mets being unable to put a winning, if not at times competitive, team on the field. We were very wrong.

Thanks to Kevin Kernan we now know what the most damaging effects of the Wilponzi Era was the sale of the jersey Mike Piazza wore when he hit this homerun:

This moment means different things to different people. I know I shed a tear when it happened. In my opinion, it is amongst the top three moments in Mets history along with ’69 and ’86. It may mean something different to you. You may fell differently. That’s fine. We all acknowledge it was a powerful moment in history.

Here’s the thing. As much as the moment means to everyone, and as much as the jersey means, I don’t blame the Wilpons for selling it. In fact, I think they deserve some credit.

Being objective, if you’re the Wilpons owning the Mets is much more important than that jersey. If you lose the team, you lose the jersey. Looking at Kernan’s article, they did a private sale, and they arranged to have the jersey displayed in the Mets Hall of Fame.

The Mets settled the Madoff case for $162 million seemingly around the same time as the Piazza jersey was sold. They got the infusion of cash they needed while still having the ability to share the jersey with the fans.  Remember, the Wilpon’s settlement in the Madoff case called for turn

However, as we now know, the Mets selling the jersey also meant the Mets lost control over the jersey. It could be sold without their permission, and it can be taken out of the Mets Hall of Fame to someone who wants to do whatever it is they want to do with it.

If you want to be angry with someone, be angry with Major League Baseball. They are the ones that allowed this to happen. This is the same organization that forced Frank McCourt out. McCourt committed two crimes. The first was he sought a $200 million loan to the Dodgers and a $30 million loan to him personally from Fox.  The second was he wasn’t in good with Bud Selig. The Wilpons were.

The Wilpons had similar crippling debt and a desperation for money.  In fact, they borrowed more than McCourt ever sought to borrow – over three times the amount. However, the Wilpons went about it the way Major League Baseball wanted. They made sure to keep in Selig’s good graces.

With that said, their free pass on this issue ends right now.

According to Kernan’s article, it is anticipated that Piazza’s jersey will sell for north of $300,000. The good news for the Mets is they released Ruben Tejada. In doing so, the Mets saved approximately $2.5 million. There is plenty of money to allocate from those savings to permit the Mets from re-acquiring a jersey they should never have been in a position to sell in the first place. There’s no excuse this time.

Despite all of this, the Wilpons are not moving heaven and Earth to get that jersey back. According to Kevin Kernan’s latest article, the seller, Goldin Auctions, will make the jersey available for sale before the auction due to the significance of the jersey. It is something the seller has never done before, but it acknowledges the importance of not only the jersey, but also where the jersey belongs. The seller believes the jersey belongs at the 9/11 Memorial. Mets fans believe it belongs in the Mets Hall of Fame, but certainly wouldn’t object to it being placed at the 9/11 Memorial.

Despite this, the Wilpins have yet to make an offer for the jersey despite having an extra $2.5 million in their coffers from Tejada’s release. They are merely monitoring the situation gauging fan reaction. This sounds just like the Wilpons’ behavior when Piazza was a Marlin on the trading block. Don’t spend the money until the fan backlash is too fervent for you not to make the move. Well, the stakes are higher this time. It’s time for the Wilpons to stop waiting around. It’s time for action.

The Wilpons need to make sure they do everything they can to bring that jersey back to the Mets Hall of Fame where it belongs.