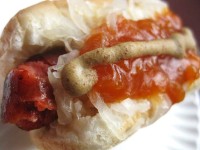 A sandwich is a sandwich, a hot dog is a hot dog! #AskFamilia https://t.co/rht7efanCs

I guess it’s a sign that the Mets are in such good shape for the upcoming season that we’re back to arguing about whether or not a hot dog is a sandwich.

Alright, let’s start with the basics. It should be fair to say that most people do not believe they are ordering a sandwich when they are ordering a hot dog at a game. However, there’s no reason why that should be dispositive. For example, most people, the State of New Jersey, and the Supreme Court believe a tomato to be a vegetable. It’s not. A tomato is a fruit. No matter how you argue it, it’s a fruit.

Now, I bring this up because there are many arguments on the tomato. The arguments are similar. It’s a gut feeling, or wanting to tax an item, that is the driving force. If you want to rely upon tax codes and the Supreme Court, I refer you to the New York State Department of Taxation and Finance who clearly defines a hot dog in a bun as a sandwich.

Personally, I wouldn’t want to rely on that. Tax codes and the like aren’t written to be correct. Rather, they are written to exact as much revenue as possible. So let’s try another route.

I’ve heard all the contrary opinions. When you order a sandwich, you’re not expecting a hot dog. Maybe, but when I order peanut butter and jelly, I’m expecting that to be on bread.

When you go to a game and order a hot dog, you expect to get a hot dog on a bun. True, but when your spouse tells you to get hot dogs from the grocery store, do you bring them home already cooked and in buns, or do you purchase them separately?

Look, it’s not a sandwich, it’s just a hot dog. To me this is an argument that just seeks to prove its underlying point. It’s like saying Lucas Duda isn’t a good first baseman because of one throw while ignoring his 57 homers in two years.

So overall, whether we like it or not, a hot dog on a bun is a sandwich. Now, can we please move onto more important topics like who will pitch the sixth inning for the Mets this year?