No One Know How Good Matz Will Be

Last year, I made sure to bring my son to Steven Matz‘s first start. I wanted him to be there to see what we all presumed was the last installment of what was to be a Mets super staff.

It was a great day. Matz allowed only two runs over 7.2 innings. He went 3-3 at the plate with four RBI. It was such an amazing first start that his celebrating grandfather became a legend in his own right: 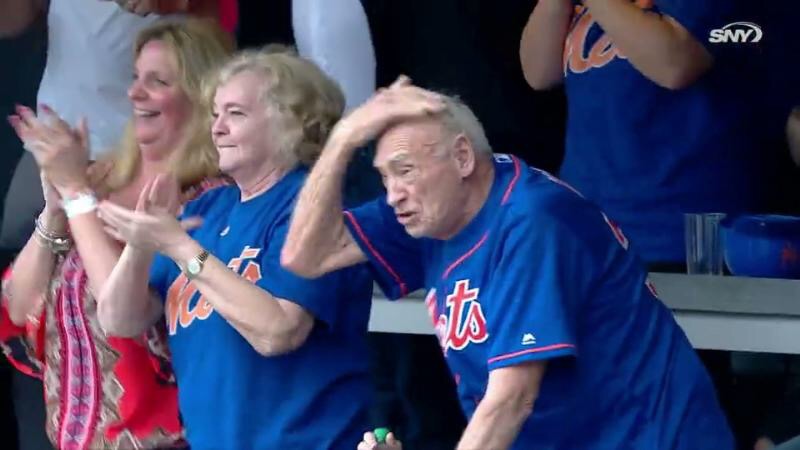 Matz followed that up with a terrific start in Los Angeles allowing no runs over 6.0 innings recording eight strikeouts. After that, Matz was shut down with an torn oblique that Dan Warthen checked out himself before the Dodger start.

He would’ve pitch again for another two months. He came back, and he went 2-0 with a 2.86 ERA in four starts. However, those numbers seem better than he pitched. In those four starts, batters hit .297/.330/.374 against him. He has a 1.45 WHIP. He would then have a back injury. This injury would not prevent him from being named to the postseason roster.

What can we glean from all of this?  Absolutely nothing. Matz’s first two starts were exciting, but they were only two starts. The four starts at the end of the season were after two months of complete inactivity. His postseason starts came more than two weeks after his last regular season start. His second postseason start came eight days later. His World Series start was 10 days later. He wasn’t getting enough work to stay sharp.

As of today, he’s probably a favorite to be the National League Rookie of the Year. Most Mets fans expect him to be an ace. I think that’s not fair. Matz hasn’t showed himself to be that good yet. The projections for him aren’t that rosy.

I’m not sure how it is to presume Matz is injury prone. While he did have two freak injuries last year, it’s not fair to say he’s injury prone. So far, all we have is the two injuries this year and a longer than usual rehab from Tommy John surgery. So while I’m sure the Mets will have an eye on his innings pitched, I also believe, he has a reasonable chance to be healthy for a full season.

The next issue is why do the projections see Matz having such a high ERA next year. My presumption is that this is based on Matz’s 3.61 FIP last year. Based upon his FIP numbers, the projected ERAs are certainly justifiable. However, again, four of those starts were made after Matz had no baseball activities for two months due to his lat injury.

We all have hope Matz will be great in 2016. However, there is nothing from his 2015 season that can establish he will be good or bad next year. Whatever happens, I’m going to enjoy the ride.