Cespedes Coming Through the Rain Again 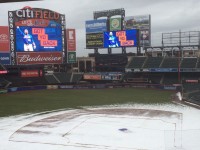 Am I the only one that finds it incredibly fitting that Yoenis Cespedes is being introduced during a rainy day?  Remember, it might’ve been a rainy day that brought him here in the first place.

Roughly half a year ago, there was some hope in the Mets season. The team had just acquired Tyler Clippard, Kelly Johnson, and Juan Uribe. Michael Conforto was up with the team and producing well ahead of schedule. Travis d’Arnaud was soon to return. While Mets fans had seen some bad baseball for far too long, things were seemingly getting much better. Then disaster struck.

There was the inexplicable drama surrounding the failed Carlos Gomez trade. Wilmer Flores was left standing on the field crying. Then we discover the trade didn’t happen. The Mets say Gomez failed a physical. The Brewers said the Mets wanted money in the deal. With all that hovering, the Mets took the field for a rainy day game. They had a 7-1 lead going into the seventh, and a 7-5 lead heading into the ninth. The Padres had two outs and Jeurys Familia had an 0-2 count on Derek Norris.

The heavens opened causing the umps to call a rain delay for a game that could’ve ended with one more pitch. The delay nearly lasted an hour. When they game resumed Familia allowed a single to Norris, another single to Matt Kemp, and then a three run homer to one-time trade target Justin Upton. After another rain delay of around two and a half hours, the game resumed seeing the Mets go down meekly 1-2-3 in the ninth. Whatever good feelings and momentum in the season was there, it was seemingly washed away. The fans were angry.

The rains eventually cleared. There would be a new day both literally and metaphorically when the Mets pulled the trigger on the trade for Yoenis Cespedes. Sure the Mets win the NL East without him, but man, the 2015 season had a different feel to it when he came on board. It was a fun run, and now he’s back. We’re ready for another ride.

But first, he’s going to be re-introduced to the fans on a rainy day. Seeing how it was a rainy day that brought him here, I wouldn’t have it any other way.