Be Patient with Addison Reed 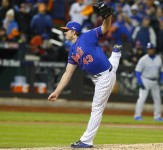 Pitchers and catchers have already reported, and the reporting date for position players is soon approaching. While everyone is settling in, the Mets coaching staff is already trying to plan out the 2016 season:

The Mets have Addison Reed penciled in as the eighth-inning guy to begin the season, according to pitching coach Dan Warthen.

Judging on his performance in his limited time with the Mets last year, Addison Reed was lights out. In 17 appearances, he had a 1.17 ERA, a 1.043 WHIP, a 2.74 FIP, an impossibly high 322 ERA+, and a 10.0 K/9.  Between his performance, and his history of being an effective closer, Reed is a natural choice to take over eighth inning duties.

However, it should be noted that performance was uncharacteristically good for Reed. In his career, Reed has a 4.01 ERA, 1.261 WHIP, 3.41 FIP, 102 ERA+, and a 9.3 K/9. Accordingly, even if Reed benefitted from working with the Mets coaching staff, he would still be due for a regression back to the numbers he’s accumulated over his five year career. What’s interesting is that looking over Reed’s career, we may be able to see when it’s coming. Here is his ERA and WHIP by each month of his career:

Reed seems to be at his best at the beginning of the year and after the All Star Break. He tends to wear down after the breaks and with increased use. Last year was an exception. He actually had a very good September.  It was perhaps the best month of his career. He had it in a pennant race. He did it with a new team.

So yes, it’s possible that Reed has figured something out, and now, he can be more consistent during the year. He did work on adding a splitter to his repertoire last year. Maybe the Mets were able to help get the most out of him. It’s possible he rose to the challenge that was presented to him. It’s more likely that Reed will put up similar numbers to those he has put up during the majority of his career.

If that’s the case, Reed will start out great and then regress. If that happens, fans should be patient with him. From his career, we can see that he will turn things around. He will be re-energized after the All Star Break. He has shown the ability to pitch well in a pennant race.

Whether or not Reed lasts the year as the eighth inning guy is inconsequential. What matters is that he is effective when it counts most. Judging from his career, 2016 is going to be a bumpy ride. However, fans should be patient with him. He’s shown us that he can produce when it counts most. At the end of the day, that’s all we want.

So with that said, Mets fans should be patient with him. If 2015 is any measure, he will reward that patience.