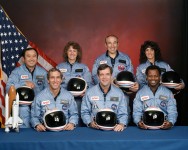 For some reason, when I think of 1986, I only think of the ’86 Mets. I have several ideas why, but it still strikes me as odd that is the correlation I make. No, going into this year, all I thought about was how this is the 30th anniversary of the Mets last World Series title.

Turns out it’s also the 30th anniversary of the Challenger disaster. It was such a bizarre day in seemingly a much different time. Back then, when someone asked a kid what they wanted to be the usual responses were an athlete, a cop, a fireman, an actor, whatever their father did, or an astronaut. Being an astronaut was such a huge deal. Every launch was an event. I’m not sure either of those was the case.

The Challenger liftoff was a huge deal. Teachers combined classes together, and they lugged in those televisions on those large aluminum carts with the squeaky wheel. In my Kindergarten class, we all sat on our carpet squares, and we anticipated the liftoff. The teachers tried to get us to countdown, but I’m not sure how successful they were. The liftoff happened, and we all started cheering. Then the explosion happened.

The TV was quickly turned off. The teachers seemed to know what was happening immediately (even if they didn’t quite know at CNN), and they didn’t want Kindergartners to see the horror that ensued. We were quickly ushered into a new activity. We were all handed notes on our way out the door advising our parents what happened.

When I got home from school, I remembered going outside and playing with my friends. We didn’t really know what happened. We all thought we saw a really cool liftoff. Ironically, we were all pretending to be astronauts that day really knowing the horrors that had ensued. Then my father came home, and I was summoned inside the house. That usually was never a good thing.

My parents then explained to me what happened. When you’re five, it’s a hard concept to fully grasp. Back then, I wasn’t sure what was happening or why the speech. Looking back on it 30 years later, I believe my parents were trying to prepare me for when my grandfather died. At the time, he was dying from throat cancer. I knew he was sick, but back then I thought being sick was not feeling good, drinking some ginger ale, and watching cartoons all day until you felt better.

I remember both having a lot of questions and just wanting to go and play with my friends again. After our talk, my parents turned on the television, and we watched President Reagan address the nation:

The Challenger explosion was the beginning what was an eventful 1986. It was a year, I too lost a family member like families of the Challenger crew. I’m sure it’s of little consolation to them, but their loss helped me process and understand my grandfather’s passing less than three months later.