Walker Reminds Me of Gilkey

In my mind the juxtaposition of Neil Walker and Bernard Gilkey is as preposterous as it is hilarious. It’s even more so when you consider Gilkey’s Men in Black cameo: 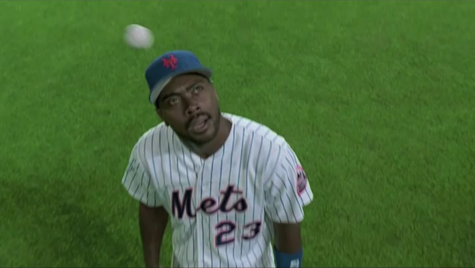 Despite this, I kept thinking how similar their coming to the Mets was.

Gilkey was St. Louis through and through. He was the local kid playing for the local team. It really is everyone’s dream come true. Gilkey was solid was the Cardinals, but they were looking to improve their team. The Mets had some young prospects in the outfield that they wanted to give more time for development. Naturally, the Mets and Cardinals made a trade.

Leaving your home is hard. It’s even harder to be living your dream only to be waken from it and be shipped to a sub-.500 team. It turns out it was the best thing that happened to Gilkey. He became the rare player who had a better year after leaving the Cardinals.

Gilkey had a career year. It was an all time year for a Mets outfielder. Gilkey hit .317/.393/.562 with 30 home runs and 117 RBI. His 44 doubles is a Mets single season record. He never repeated the performance, but it was a wild ride for a fan base starving for something positive with the Mets. Gilkey helped provide hope that hadn’t been around for years.

Walker arrives to the Mets under different circumstances. Where Gilkey led the big Mets revival, Walker is arriving a year later, but the Mets are still counting on Walker to help them get to the next level. Like Gilkey, Walker is leaving his hometown.

Now, Walker is Pittsburg. He was born and raised there. Having been born in 1985, he probably only knew the bad times. He experienced the 20 consecutive seasons as a fan and as a player. However, it was more than that. He was a key cog in the Pirates team that turned it around and made the Pirates winners. It meant a lot to someone who was a Pittsburgher through and through:

There’s also something intersting about Walker, the Pittsburgh native and Pirates farmhand.  He’s here for the same reason Roberto Clemente isn’t. Walker’s father was a former player, who had a close friendship with Clemente. Walker’s father was part of Clemente’s charitable efforts. Walker actually helped Clemente load that fateful plane that would crash claiming the life of Clemente and others. It was Clemente that advised Walker Sr. not to get in that plane.

In Saving Private Ryan fashion, Walker earned it. He gave Pittsburgh the local hero that turned them into winners. It’s part of the reason Pirates fans are crushed. I sympathize with them. Seeing how Walker is already working to endear himself to Mets fans, I can see why he was so popular:

As a Mets fan, I wasn’t a fan of the trade, in part, because it means no more Daniel Murphy. However, I’m rooting for Walker. I want him to succeed in every way. Ironically, I never thought the Mets could get him. I thought pursuing him was a good idea. I just wanted Murphy more. Im hoping he’s better than Murphy. I’m hoping that like Gilkey, Walker can show his hometown team they were wrong for trading him.

Gilkey helped the Mets take the next step. It’s time for Walker to do the same.