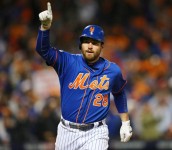 With the Mets moves yesterday, what was once thought to be a foregone conclusion became a reality. The Mets will not be re-signing Daniel Murphy.

There’s not a Mets fan alive that wasn’t a huge Murphy fan in 2008 when he was first called up. He hit and hit well on a Mets team trying to avoid a second straight collapse. Naturally, he was slotted in as the Opening Day LF for the first year in Citi Field. Only problem was he wasn’t a LF, and he was sent down.

We learned over time that Murphy wasn’t much of a fielder, but it wasn’t for the lack of trying. The man always hustled and competed. It’s a testament to who he was that  he became an All Star second baseman. Murphy had his flaws, but he can through when it mattered. This year he got another chance to play for a winner, and he made the most of it.

He almost singlehandedly won the fifth and deciding game of the NLDS in what can only be described as “The Murphy Game.”  He was the NLCS MVP during the month of Murphtober. His amazing hit streak helped bring the Mets to their first World Series in 15 years. Murphy was a big reason why my Dad, brother, and I got to go to a World Series game. It’s not what I’ll remember most about Murphy.

I’ll remember when I met him during batting practice when my wife was expecting (she was at home). I had a Mets onesie I was getting autographed for him. Murphy stopped by when he saw it. He was the first player to come over that day. He of course signed the jersey, and he sent some players over.

He would congratulate me and wish me the best of luck. Before he left, he picked up a baseball from batting practice, and he handed it to me. Being a little greedy, I asked him to autograph it. He didn’t. Instead, he said he was giving it to me, so I could teach my son how to play baseball with a baseball from the Mets.

It was a gift for my son, but really it was a gift for me. It was a touching gesture that I’ll never forget. I still know where the ball is, and I do intend to have catches with my son using the ball. It’s only fitting that Murphy is my son’s favorite player. He’s the reason my son likes to hit left handed. At least in my house, he will always be the Mets second baseman:

Mostly, I hope whoever the next player who becomes my son’s favorite player is as worthy of the honor as Murphy was.