The Boras Hatred Baffles Me 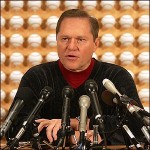 It didn’t start this year with the drama surrounding the Matt Harvey innings limits. Fans revile him. Why?

Maybe it’s a misunderstanding of his job. Boras has one singular job, and that job is to be a player’s agent. Typically, that means maximizing the amount of money his clients receive either in arbitration and/or free agency. It’s why he has one of the most valuable agencies in all of professional sports. It’s why he represents players like Matt Harvey.

A corollary to his job is to protect his players when he thinks they need protecting. It’s why he started the issue over Harvey’s innings. People forget at that time, Harvey had pitched 171.2 innings, and had four remaining scheduled starts. If he made those starts, and threw six innings per starts, he would’ve finished with 195.2 innings.

By stepping in, Boras and the Mets were able to create a plan which allowed Harvey to pitch in the postseason. As it turned out, Harvey still threw more innings than anyone has in the year after Tommy John surgery. Without Boras, we miss that incredible Harvey Game 5 start.

Another note for Mets fans: he’s been skewering the Mets front office much in the same way the fans have. As Mets fans were angry over the lack of spending, it was Boras who mocked them stating they were shopping in the frozen food aisle. Basically, he said what every fan was thinking.  With the Mets winning the pennant, he gave credit where credit was due.

Ultimately, Boras is great at what he does. It’s the reason why he gets clients like Harvey. If you were a baseball player, you’d most likely hire him. You and I are no different than any athlete. We just want to make as much money as possible. We want someone to protect our interests.  Boras does that.

He protects his clients and makes sure they get paid. He calls out owners whose payroll isn’t commensurate with their market.  He doesn’t do anything to hurt the game. So why does everyone hate him?  I really don’t get it.