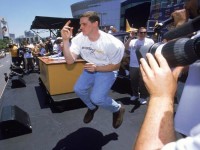 Remember when the Lakers were winning titles with Shaq and Kobe?  They were unquestionably the stars of the team. However, what everyone was talking about after the victory parade was Mark Madsen:

Jonny Gomes took up the Madsen mantle at the victory parade:

Look, I’m all for fun and a little trash talk, but you have to earn that right. It’s not like Gomes was a long time Royal, or he was waiting for his first ring. It’s not like he had to sit and watch from the bench all year. He was a waiver wire August 31 acquisition that didn’t play.

He’s now going up and down the stage with an American flag like he’s Hacksaw Jim Duggan without the looks or brains. There were plenty of Royals there who actually contributed, but he was the spokesperson. Every Mets played should watch this as motivation not just for Opening Day, but also to win the 2016 World Series.

I can’t wait to hear Campbell’s speech in the Canyon of Heroes.