I Ordered the d’Arnaud 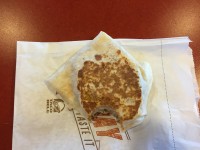 Today is the day. Wake up and get your free A.M. Crunchwrap between 7-11 a.m. Rules: https://t.co/yyutdNEGEA pic.twitter.com/iNv9pDuaxY

The reason for the free AM crunch wraps?  It’s because the Royals were able to steal a base during the World Series. The steal that got us free breakfast was Lorenzo Cain stealing second in the sixth inning of Game 1 of the World Series. He would score to bring the game to 3-2.

Overall, the Royals were 6/6 stealing bases off of Travis d’Arnaud in the World Series. This includes a whopping 4/4 in the deciding Game 5. It caused me to sarcastically text my Dad and brother during the game that when we say we wanted d’Arnaud to be like Mike Piazza this isn’t what we meant. Look, I know there are many elements to what causes stolen bases, but a catcher loses the benefit of the doubt when he can’t reach second base.

In any event, it’s hard to say the Mets lost the World Series because of d’Arnaud. There were so many different elements that it’s hard to point a finger at d’Arnaud. I also don’t think it’s a reason to move him out from behind the plate because he does everything else well.

He’s a terrific pitch framer, who makes sure his pitchers get that borderline strike call. As the stats suggest, his work behind the plate gets his pitcher not just the corner but a little off of it. Also, he’s a good hitter. His triple slash line this year was .268/.340/.485. To put that in perspective, another great Mets catcher, the late great Hall of Famer, Gary Carter, hit .262/.335/.439 for his career.

Is d’Arnaud as good as Piazza or Carter?  No, but that doesn’t mean he can’t be a good catcher for the Mets. All he needs is a little health and to work on his throwing mechanics a bit. (Note: I’m not comparing him to Mackey Sasser. Not going to happen).

In any event, I had my AM crunch wrap courtesy of a stolen base in the World Series. A World Series the Mets should’ve won. Hopefully, I’ll have one next year because of a Juan Lagares‘ stolen base.