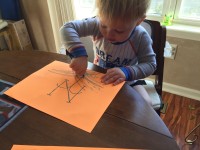 When the Mets went to the 2000 World Series, I was jumping up and down alone in my dorm room. Not many Mets fans in Western New York.

When the Mets won the 2006 NLDS, I was at a bar down the road from my apartment. My brother and I ran down there after the end of the seventh inning. I remember the bar erupting, and people spraying beer all over like it was the locker room. It was awesome.

Last night, I woke my 22 month old so up to see the final out. I had a much ore romantic idea of what was going to happen. We were going to cheer and high five. We would then call my Dad and brother. Instead, he watched the last out and got really, really cranky. While I was over the moon, I was trying to get a cranky kid back to bed.

Once I accomplished that, I went downstairs, and I talked to my Dad and brother in hushed tones. They’re excited and talking loud. I’m talking in a loud whisper. I then went back to bed and watched all of the postgame coverage.

Side note: as I noted in an earlier post, my son has been on the money in his predictions. I’ve been keeping him up later with the playoffs. When Lucas Duda came up, he said, “Duda homerun!”  We know what happened next:

Right after the homerun, my Dad texted me “J4 called that for Duda?”  When I replied he did, his next text was, “Tell him to keep it up and speak for Wright.”  I’m trying folks.

This morning, my son didn’t want to get out of bed. He was tired. I wonder why?  When he woke up, he said to me, “Mets HOMERUN!”  It certainly was. It was the celebration I was looking forward to last night. It’s okay that I had to wait for it.

Now, I just need to follow my Dad’s request and get him to predict a homerun for Wright.