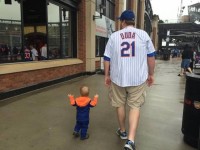 If you’ve read this site before, you know I’m a big fan of Lucas Duda. So is my son. I’m rooting for him even if he’s having a rough NLDS.

He’s 2-15 with two walks and nine strikeouts. That’s a triple slash line of .133/.188/.133. That’s ugly. It’s hard to justify giving him playing time. With that said, he has to start in Game Five tomorrow. Now, unlike most, I’ll admit my bias here. I like Duda as a player. However, that’s not the only reason I want him to start tomorrow.

He’s had some success against Zack Greinke. He’s 3-12 with one homerun, one RBI, and two walks.  It is a small sample size, and he went 0-3 against him in Game Two. With his cold streak, you could argue it’s time to play someone else.

If you sit Duda, then who do you play? One popular opinion floating around is moving Daniel Murphy to first and starting Kelly Johnson at second. That shouldn’t be an option with Johnson going 0-9 against Greinke. He’s also 0-3 with two strikeouts in his pinch hitting appearances this postseason.

The next option would be Michael Cuddyer. Cuddyer has had some success against Greinke as well going 10-40 with a double and a homer. He’s also struck out 10 times against Greinke. Given the comparability of Duda’s and Cuddyer’s numbers against Greinke you could argue the Mets should start Cuddyer, which is something no Mets fan is lobbying for right now.

However, I believe you have to start Duda over Cuddyer. If you don’t, this leaves your right handed pinch hitting options to Kevin Plawecki, your backup catcher, and Juan Lagares, the Mets defensive replacement. The Dodgers will have three lefties in the pen assuming Clayton Kershaw isn’t available. I’d prefer Cuddyer pinch hitting in this spot over Lagares or Plawecki.

Lastly, Duda has been extremely streaky this year. He can flip the switch at any moment. He did go 0-4 last night, but he also gave one a ride last night. Hopefully, it was a sign he’s coming out of it. It’s reason enough to play him tomorrow. I like focusing on this reason other than the lack of better options.

So, I’m hoping the Mets play Duda, and he gives one a ride. He’s done it before against Greinke. He can do it again.