All Is Forgiven Lawrence 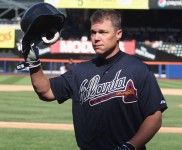 The best part of any rivalry is having a foil. In the Mets-Braves rivalry, that foil was always Chipper Jones.

I remember during his 1999 MVP year, the Mets-Braves rivalry was at its height. There was John Rocker insulting everyone. It may be hard to believe, but Shea Stadium was built into a much bigger lather than Citi Fieldcwas last night. However, there was another player Mets fans hated more than Rocker. It was Chipper Jones.

Chipper would hit .313/.407/.557 with 19 homeruns and 55 RBIs. He hit so well at Shea, that he named his son Shea. He tormented the Mets and their fans for 19 long years. The Mets fans only response was the “LARRY!” chants. That one came courtesy of an Orel Hershiser call into the Fan. Other than that, Mets fans just had to endure his career.

After Chipper Jones built a Hall of Fame career off of the Mets, he’s apparently now rooting for the Mets:

I knew the Mets were getting some bandwagon fans, but this is ridiculous. However, if Larry, sorry Chipper, wants to come along for the ride, he can hop aboard.  He earned that right when he ripped Chase Utley:

That was not a slide and that is not how u 'go in hard'!

So, welcome aboard Chipper. Nice to finally have you on our side.