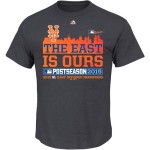 This is the sixth time the Mets have made the playoffs in my lifetime. In 1986 and 1988, I was too young to run out and buy playoff gear. In the subsequent years, I was able to purchase playoff gear, and I did. I wasted my money.

So take my advice. Don’t rush out and buy the NL East Champions gear. I understand your excitement, but you’ll wear it for a month at most. Save your money for the World Series. You can use the extra money to get extra stuff. Trust me. You’ll thank me later.