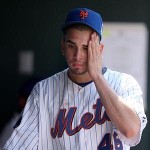 After Duaner Sanchez‘s infamous cabride, Omar Minaya made a trade to acquire Roberto Hernandez and Oliver Perez. While the thought process might have been to get another reliever, it was Perez who was pressed into action.

At first, Perez seemed like an asset for the future. More likely, he was a throw-in. However, Pedro Martinez‘s season ended in September because he needed rotator cuff surgery. El Duque was injured right before Game One of the NLDS. Steve Trachsel was horrid in the NLDS and the NLCS. The Mets had no option but to press Oliver Perez into action.

With the Mets down 2-1 in the NLCS, Perez pitched reasonably well. Through five innings he only let up three runs. He started to lose it in the sixth, but that was only after the Mets expanded their lead to 11-3. Then came that epic and tragic Game Seven. Perez was pressed into action again. This time it was on three days rest.

In Game Seven, he allowed one run over six innings. He was terrific that night, but he was mostly aided by Endy Chavez:

By the way, I was there. I’ve never see Shea like that. For all the good Citi Field has to offer, it will never be like it was at Shea after that catch. I don’t need to continue as to what happened next.

In 2007, Perez went 15-10 with a 3.56 ERA. In 2008, he wasn’t as good, but he was effective going 10-7 with a 4.22 ERA. He started the last game at Shea with another collapse on hand. He gave the Mets 5.1 innings with two earned allowed. He kept the Mets in the game allowing Carlos Beltran to tie the score in the sixth on a two run homerun. The season effectively ended when Jerry Manuel brought in Scott Schoeneweis.

It’s a shame. He could’ve been beloved by Mets fans forever instead of the villain he is. While good-byes are hard, sometimes it’s harder when the player stats too long.