Editor’s Note: If you’re looking for the current magic number, please click on the link here.

As per a suggestion from one of my loyal readers, my brother, I decided to have some fun with the Mets’ magic number. For this, I figured, I would have some fun with it because if you can’t have fun, what’s the point in doing a blog.

With the magic number being 17, I immediately thought of Keith Hernandez, but honestly that’s boring. Everyone points to him.  I was his picture all over Twitter last night.  However, I did get some inspiration from Keith. While he’s never actively sought for his number to be retired, he has grizzled at the players who have been assigned his number.

So with that in mind, I’ve decided to go with a lesser player to wear a particular number. Preferably, I’d like to stick with players I’ve seen. It’s even better if I can focus on players that played during losing seasons. I figure it’s a good reminder that seasons like this don’t come around all the time, and we should enjoy them when they come. So, without further ado, I present Jeff McKnight: 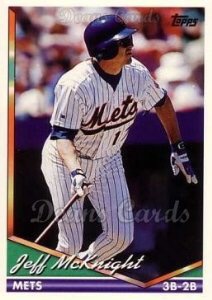 This is perfect. The Mets were terrible with a 59-103 record. It was a year after the Worst Team Money Can Buy. Also, let’s not forget those horrible underscore jerseys.

McKnight wasn’t a great player, certainly not good enough to wear Hernandez’s number. He was a Mets second round pick that never panned out. He was a career .233/.284/.304 hitter. He only wore 17 in 1993. I don’t do this to mock McKnight. It takes a lot just to make the big leagues.

However, it’s a reminder the Mets were terrible, and we should enjoy these years when they come. So I offer a hat tip to Jeff McKnight.