I’ve alluded to who my selection for number 8 would be. After looking over the candidates and my self-imposed rules, the pick is Carlos Baerga: 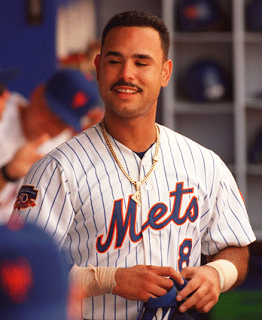 Now, record wise, 1997 and 1998 were pretty good. However, 1998 was heartbreaking. For all the fans looking for a repeat of 2007 and 2008 after a couple of losses to the Marlins, they forgot about the original collapse.

The Mets had a one game lead over the Cubs and four games over the Giants with five games remaining (seven for the Giants). The Mets lost all five of their remaining games. They were home as the Cubs and Giants had a play-in game for the Wild Card featuring future Met Steve Trachsel, and former Met, Jeff Kent.

In those final five games for the Mets, Baerga went 2-13 (.154) with no walks, one RBI, no extra base hits, and one game on the bench. He wasn’t the only one responsible for that collapse, *cough* Mel Rojas *cough*. However, the Mets were stuck with Baerga while Kent was in the play-in game. It just shows you how changing one player for another can have a profound impact on your season. With this year’s flurry of trades, it’s something Mets fans know well.

So let’s tip our cap to Magic Number 8, Carlos Baerga, who shows us, in part, our fears of collapse are behind us.