I so badly wanted to use number 11 to rant about how much I despised Razor Ramon Castro. However, since he was on good Mets teams, he doesn’t qualify.

That’s fine. I was able to find a truly despicable Met in Vince Coleman: 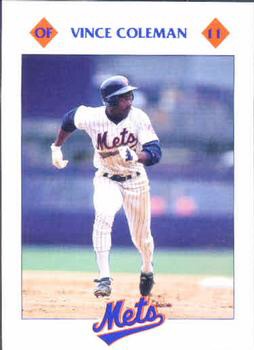 Coleman was a terrible Met, and if his Mets tenure was any indication, he was a terrible human being. It all came to a head in 1993, the only year Coleman wore 11, for a 59-103 Mets team.

That was the year Coleman crossed the line you do not cross. He attacked the fans. After a July game, he threw a M-100, which is used by the military to simulate grenades, towards a group of 200+ fans less than 30 feet away. It was described as nothing more than a prank. I guess it’s alright that he threw the firecracker because they were heckled after not stopping for autographs.

Unsurprisingly, there were fans injured. This included a two year old girl who suffered from second degree burns, a lacerated cornea, and an index finger injury. So no, I don’t agree with Coleman when he says he’s “no monster.”  Who does this to people? By the way, where was Bud Selig, who was then acting commissioner?  The lack of a suspension makes Roger Goodell look like he has a clue. Speaking of punishments, Coleman would serve no jail time, get 200 hours of community serve, and owe a small fine.

This was the lowlight of an otherwise dreadful 1993 season. It was a season that reminded you that sometimes your team is hard to root for when it has terrible people. It’s not only the baseball is bad, but the players are terrible as well. They don’t respect each other, the fans, or the game. They suck a the fun out of everything.

When I first thought of Coleman and the 1993 Mets, I was irritated. However, I began to think of the 2015 Mets and how they are the polar opposite in every way. This team is enjoyable. They play hard. They respect the fans. In fact, thinking of the 1993 team has made me appreciate this team all the more. Since that was the goal of this series, I guess mission accomplished.

I’m not offering a hat tip here to Coleman. He doesn’t deserve it. Let’s tip our caps to the 2015 Mets and hope they complete their mission to win the World Series. Lets Go Mets!