Considering the fact that only three Mets have worn the number 14, I thought it might be hard to keep up my Magic Number series.

First and foremost, including Gil Hodges was a non-starter. Sure, he was an original Met. That meant he played on the worst team in MLB history. He also turned the franchise around as a manager and was in the dugout when the Miracle Mets won the 1969 World Series. He also died too young. Lastly, the number 14 was retired in his honor.

One of Hodges’ players on the ’69 Mets was Ron Swoboda. That was also a non-starter as he was a key member of the 1969 team. I know he wore 4 that year, but that was because Hodges took it back. In any event, the infusion of Swoboda would’ve been nonsense with this catch (1:24 mark): 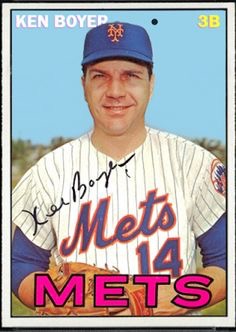 Now, Boyer is a borderline Hall of Famer. However, in the great tradition of Mets acquisitions, he was better elsewhere, much better.

So without further ado, let’s all offer a hat tip to Magic Number 14, Ken Boyer.