Yesterday, the problem was finding out who to pick for 14 in this series with the paucity of choices. Today’s selection was an abundance of good choices.

There was Roberto Alomar‘s disappointing tenure. I’m sure there are Mets fans that would’ve picked Willie Randolph, but he was decent with the Mets in the last year of a good career. Furthermore, I was higher on him as a manager than most people. I remember that Jeff Kent was hated by Mets fans, except the ones in my household.

When fans booed Kent, my Dad was baffled. When he saw Kent, he saw a terrific player. My Dad was right. Kent played well in his five years as a Met. Kent would win the 2000 NL MVP and finish his career with the most homeruns by a second baseman. However, all of that happened elsewhere. Why elsewhere? Well, the Mets made an idiotic trade including him and Jose Vizcaino for Carlos Baerga and today’s selection, Alvaro Espinoza: 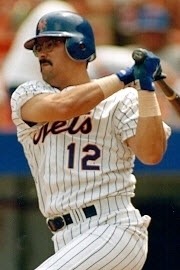 Espinoza was not a great major league player, but truth be told, he was at his best in those 48 games with the Mets. So, why pick him?  He was part of a trade that ditched a possible Hall of Fame second baseman for a player fading fast in Baerga. Neither player was of much help, especially in a 1996 season when the Mets finished 71-91.

Baerga’s numbers dropped steadily his three years in New York, and he couldn’t stay on second base.  He would be gone before the glory years of 1999 and 2000, but you know who would reappear in 2000?  Vizcaino. The man who put an end to Game 1 of the 2000 World Series. He was in that position due to Timo Perez‘s lack of hustle and Armando Benitez once again caving in from the pressure.

So I picked Esponiza more as a symbolic gesture as a reminder that the trade for the star usually doesn’t work in the Mets history. I think that reminder is quite aprospros this season.

With that in mind, please join me in offering a hat tip to Magic Number 12, Alvaro Espinoza.