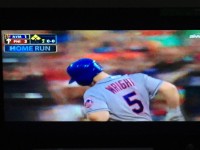 It’s easy to get wrapped up in all of the story lines from this game, and there were many. However, win, lose, or draw, this game was always going to be about David Wright‘s return. He started his return with a bang . . . or should I say a blast:

What a way to start!  He would finish the game going 2-5 with that homerun, a walk, three runs, and an RBI. He also made two errors in the field. Hey, he isn’t perfect. I’m willing to let him get up to game speed. We all know he’s going to work to get better and be better. Surrounding Wright’s return was quite an interesting game.

While Wright was rising to the occasion, Jacob deGrom wasn’t ready for today. He had his worst outing in terms of innings pitched and runs allowed. His ugly line was 2.2 innings, 8 hits, 3 walks, and 7 runs (6 earned). He left the game down 7-2. Sean Gilmartin would come in and save not only deGrom, but also a depleted bullpen. He would go 3.1 innings striking out four and holding the Phillies to seven runs. That was important because the Mets offense was about to go off again in a bandbox.

The team tied team records with eight homeruns and 15 extra base hits. Here’s the collection of homeruns:

It wasn’t until d’Arnaud’s two run double in the sixth that the Mets scored a run without hitting a homerun. It was the Murphy 9th inning double that broke the record, but it was the Cespedes’ “Feats of Strength” that put the cap on the evening. Overall, the Mets treated Citizens Bank Park so much like Coors Field that they scored 14+ runs for the third time in four games. They would win 16-7.

In fact, things went so well from the Mets from the fourth inning on that Hansel Robles pitched a 1-2-3 seventh. Even Eric O’Flaherty had a 1-2-3 inning getting one righty and two lefties out. Carlos Torres‘ ninth inning was even fairly uneventful.

Also, even with the questionable lineup, Terry Collins had a good game. He got deGrom out in time. He rode Gilmartin as long as he could, especially with the short bullpen. I’m not going to disagree with him leaving Wright in fir the full game. You could make a reasonable argument to pull him in a laugher. I liked keeping him in there for a full game. It’s his first major league game since April. Let him get fully up to game speed. Although with the Mets not having two relievers who can give multiple innings, I do question using Torres in the ninth.

One another note, as I said before, these bandboxes produce some ugly and weird baseball. In the bottom of the eighth, Ryan Howard hit a hard line drive into the shift. Flores made a diving stop, but he couldn’t hold onto the line drive. As Howard was walking off the field, Flores got to a knee and threw it to first base. Howard then ran back to first, and because of the off the odd angle, he was heading towards second base when he ran through the bag. As Gary and Ron mused, it would’ve been interesting to see what happened if the throw didn’t beat Howard.

Overall, it’s tough to figure out if Gilmartin or Flores gets the game ball. We do know the Mets expanded their lead to a season high 5.5 games. I’m going to celebrate with a cookie.