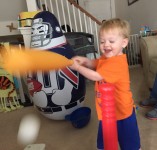 Today is National Lefthanders’ Day. The day made me think of my son and his baseball future.

If you’re a baseball fan, and you have a son, you want him to be left-handed because seemingly there are more chances for left handed pitchers. Left handed pitchers throw the ball with more spin. They seem to have longer careers. Mets fans need look no further than John Franco and Jesse Orosco.

Plus left-handed batters are described as having beautiful swings. There is Tony Gwynn, Ken Griffey, Jr., and Ted Williams. For Mets fans, we think of Darryl Strawberry and John Olreud. Oh yeah, the greatest baseball player of all time was left handed.

Now, I know children will not truly have a hand preference until they are about four. Right now, there are some things he does right handed and some things he does left handed. However, it doesn’t stop me from dreaming or playing baseball with my son. When we play baseball, I have him switch hit.

I may want him to throw the ball left-handed, and I may occasionally put it in his left hand, but he really throws with both hands. I joke with my wife that ultimately it doesn’t matter because he’ll throw lefty when he’s older. You may not know this, but Billy Wagner is naturally right-handed. He began playing lefty when he broke his right arm. It reminds me of when I broke my right thumb playing baseball around the same age.

I went to a yard sale and got a left handed glove large enough to fit over my splint.  I would practice throwing lefty and catching with my new mitt until I got caught.  I would sneak out of the house and ride my bike to my Little League games (my splint hidden in my bat bag). My mom would arrive in just enough time for my name to be scratched from the lineup.  I never got the opportunity to be like Billy Wagner. Something tells me my wife won’t let that happen either.

Anyway, that is how much I loved baseball (and still do). You couldn’t keep me off the field without a fight. I already see glimpses of that with my son.  He loves baseball. He was watching the game last night telling me when the players hit the ball. He knows a double and a homerun.

I’m glad he loves the sport. Lefty or not, I’ll be there playing with him, and hopefully, one day I’ll be there when he suits up for his first game in the majors. If he doesn’t, I’ll still love him and be proud of him . . . it’ll just mean I’ll have to buy my own tickets.