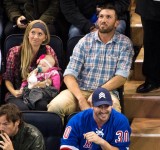 Let’s face facts – Jon Niese should not have started this game. His wife was in labor, and he must’ve been distracted. We all know he gets easily distracted and frustrated when things don’t go his way. When there’s a missed call or error, you know a big inning is coming.

I don’t blame Niese for being distracted this time. Every Dad becomes apprehensive when their wife goes into labor. I couldn’t imagine being a 10 hour drive away when my wife went into labor. I’m genuinely happy he was able to watch the birth via Facetime. I even forgive his three inning, six run performance.

However, I don’t let the Mets off the hook because they eliminated whatever advantage they had as Zach missing the start to attend the birth of his baby boy. The Mets should’ve planned ahead and had Logan Verrette with the club. Once Niese’s wife went into labor, Niese could’ve been put on the paternity list and Verrette could’ve started the game. If they did not want to go that route, Carlos Torres should’ve started the game and went as far as he could go.

Overall, i applaud the MLB and the MLBPA for the paternity leave policy. I think Dads should be able to attend their child’s birth. It is one of the few events you don’t get back. Even in the best case scenarios, the mothers need help; especially from the Dad.

I think fans forget that players aren’t around as often to see their kids grow up. Yes, they make ungodly amounts of money, but they’re also human. We shouldn’t take these first few days away from them.

Personally, I remember soon after my son was born, I had to go out of state on business It was hard for me to leave, and it was even harder in my wife (even though my mom was over to help).  I know I should’ve left the day before, but I didn’t. I know I should’ve stayed overnight, but I didn’t. I had a 23 hour day where I drove in the snow both ways. Why?  I couldn’t stand to be away from the two of them. Now how am I going to get on a ball player who feels the same and just wants or needs a day or two?

Oh by the way, Michael Conforto became the Mets’ 1,000 player and went 0-3 with an RBI. He looks like he belongs.

Anyway, congratulations are in order to the Niese and Greinke family. I hope the Mets new additions of Conforto, Uribe, and Johnson bring Mets fans 1/10 of the happiness those families feel today.