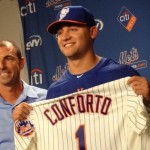 The Mets have finally put Michael Cuddyer on the DL and called-up Michael Conforto. It’s about time. Cuddyer has been injured for almost a month, and Conforto has done nothing but rake.

After last night’s debacle, the Mets front office probably felt like there was no other choice. I believe that Conforto will be the everyday star in the Mets lineup (albeit maybe not immediately) to match the five aces they will have in the rotation next year. I look forward to my son and I wearing Conforto jerseys in the next few years as the Mets make a push to win a World Series. Even with all that excitement I’m feeling right now, there is something pulling me back a bit.

I believe what is pulling me back is that this is a strong indication that the Mets can’t or won’t do anything on the trade market. In yesterday’s press conference, Sandy Alderson said the Mets have money to spend, but the media reports sing a different tune. Right now, the thing that sticks with me the most is that Sandy Alderson, the team’s GM, seemed to be against calling up Conforto. His quote at Thursday’s press conference was, “[o]ne of the considerations is that most young players who come up to the big leagues aren’t terribly successful in the short term . . . .” His words; not mine. Now, however, after almost getting no-hit and a fan mutiny seemingly coming to fruition, the Mets make a move they were reportedly against making. If the Mets didn’t want him to have the weight of being the savior, they chose an awful time to call him up. The Mets offer this move as an olive branch. However, I think this olive branch has a red herring on it.

Mets want us to run to the ballpark to see him. My Dad did that with me with Darryl Strawberry was called up. I did the same with my son when Steven Matz was called-up. However, I’m not so sure about running to the ballpark this time. The Mets have saved a lot of money this season with Wright’s unfortunate injury and Mejia’s suspension. They’re not putting that money back into this team that has a rotation that could win a World Series. How could I justify spending my money on a team that won’t spend the hard earned cash I give them?

Overall, I am ecstatic about Michael Conforto, and I cannot wait to see him put on his #30 tonight. I look forward to the first at-bat of what I hope is a long and prosperous Mets career. Welcome to the majors Michael Conforto.